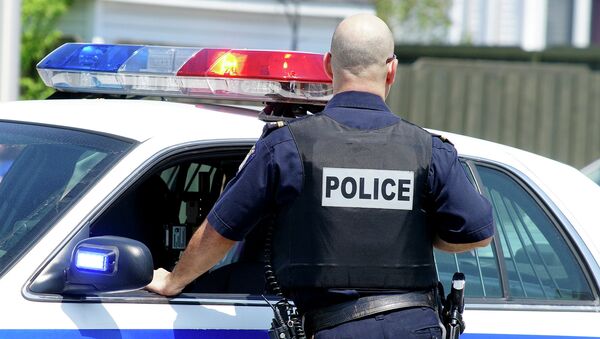 The video shows four police officers dogpiling onto Matthew Murphy, 30, before hitting him in the head with a stun gun as a large crowd looks on.

Bystanders yelled at officers as they arrested the man. One officer pointed the stun gun first at somebody in the crowd before striking Murphy with it.

​Murphy's mugshot shows him with several big scrapes and contusions on his face and head.

Murphy does not appear to be resisting the police in the video, local media station WDRB wrote. He has been charged with two counts of assaulting a police officer, one count of resisting arrest and another count of disorderly conduct.

The video, however, does not show the beginning of Murphy's interaction with police Nonetheless, what can be seen in the clip has led many on social media to condemn the police for using excessive force.

According to arrest documents, off-duty police officers were called to the area because of a fight. When they arrived, Murphy started "striking, kicking, squeezing" officers and "causing great alarm."

A detective was "forced" to fight Murphy "in the middle of the street," the report says.

Louisville Metro Police spokesman Dwight Mitchell said police are aware of the video and are reviewing it, but refused to give more information.

After being taken to the hospital, Murphy was accused of having spit at an officer, which is also considered grounds for an assault charge in the United States. Murphy "became disorderly" and stood up in his hospital bed, according to a police report. The officer was reportedly "trying to gain control of Murphy" before he was spat on.

Murphy was charged with an additional felony assault of an officer count over the spitting incident.