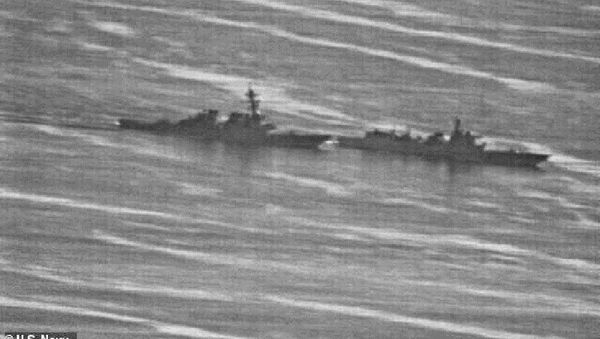 © Photo : U.S. Navy
Subscribe
International
India
Africa
Although the incident occurred in late September, some details, namely a transcript of the verbal exchange between the crews of both ships, have surfaced only now. According to Chinese authorities, the country’s destroyer lawfully reacted to a foreign ship entering their sovereign waters.

The South China Morning Post has obtained footage showing two warships, the Chinese destroyer Luyang and a US Navy vessel, on the brink of collision in the South China Sea in an incident last month, as the Chinese vessel stopped just yards away from the US one while patrolling waters roughly 12 nautical miles off Gaven Reef.

Never-before-seen footage: A near collision between a Chinese and a US warship in the South China Sea. https://t.co/j6kwkEYQHy pic.twitter.com/flXI8GTERE

In the footage, an unseen US Navy serviceman is heard describing the Chinese ship “trying to push us out of the way” while unarmed Chinese naval personnel are seen on deck.

According to a timeline the Chinese newspaper obtained from Britain’s Ministry of Defense through a freedom of information request, the destroyer issued a stern verbal message to the USS Decatur before sailing within 45 yards of the vessel, urging it to change its course before it “suffered consequences.”

“We are conducting innocent passage,” the US vessel responded, according to the transcript.

US Pacific Fleet officials said at the time that the “unsafe and unprofessional maneuver” by the Chinese destroyer forced its vessel, which was out on a “freedom of navigation” patrol near the Spratly Islands, to change its course to avoid a collision.

China countered at the time that the US vessel had entered Chinese waters, demonstrating provocative moves. The Luyang “took quick action and made checks against the US vessel in accordance with the law, and warned it to leave the waters,” China’s Defense Ministry commented on the incident.

The video naturally couldn’t go unnoticed on Twitter, with users contemplating on what it would be like if a Chinese warship popped up somewhere in the Caribbean, thereby depicting a “mirror” situation:

Spratlys are kind of far from coast of China, no? On the other hand, if a Chinese war ship were to come rumbling through the Caribbean, similar reaction would be likely.

US ship should have been taken for violating PRC territorial waters

Others, however, stated that it is “common” and doesn’t necessarily hint at war being imminent:

It’s common,collision is not like shooting,so it can’t become a war,recently every country likes doing that,using warships or fighters to hit each other

There are those who vocally supported the Chinese move:

This shows the Chinese is prepare to risk lives in order to defend it's territorial water. If China gives way, history will repeat itself the West and Japan will occupy China again.