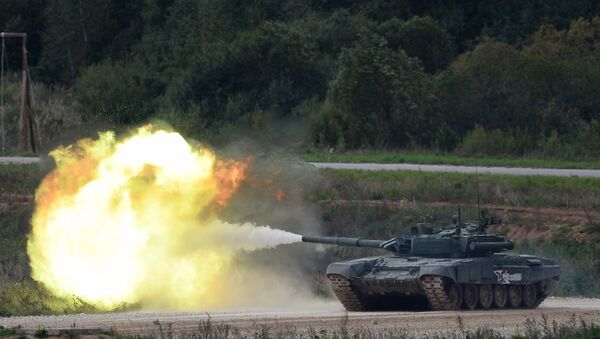 MOSCOW (Sputnik) - The Russian T-90 tanks outperform US and German combat vehicles in the Middle East conflicts, experts of the US National Interest magazine said.

According to an article written by Sebastien Roblin, an expert in security and conflict resolution from Georgetown University, US-made M1 Abrams tanks that were in service of the Iraqi army in 2014 failed to help prevent Mosul from being seized by terrorists, who captured the vehicles and used them against the Iraqi forces.

BAE Systems Unveils Enhanced ‘Night-Fighting’ Battle Tank for UK Army
The Houthis movement in Yemen also managed to knock out a large number of M1 tanks that were at the disposal of the Saudi forces, the outlet said.

The US tanks of the M60 Patton and Sabra types and German Leopard-2 combat vehicles, owned by the Turkish army, also failed to withstand Kurdish militants and Islamic State terror group (IS, banned in Russia), the magazine added.

To highlight the performance of Russian T-90 tanks, the expert noted a video, distributed in February 2016 by the Syrian opposition, which featured a T-90 tank neutralizing a TOW anti-tank missile in Aleppo.

The tank’s Kontakt-5 explosive-reactive armor neutralized the warhead of the TOW missile prior to the strike, minimizing the damage, he stressed.

READ MORE: Everything You Need to Know If You Want to Buy a Russian Tank

In Russia, the T-90s entered service in 1993 to replace earlier T-80 and T-72 modifications. Since 2011, the Russian army has stopped commissioning T-90 and is instead increasing its numbers of the T-14 Armata, whose production started in 2016.