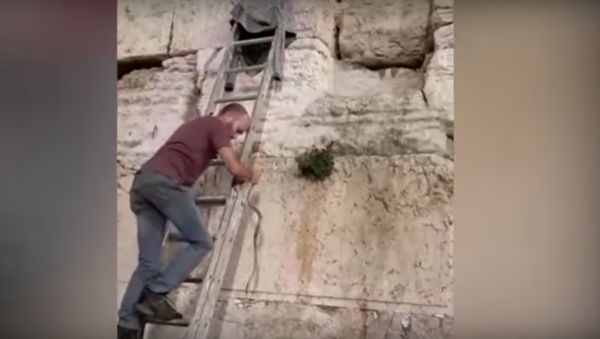 A serpent slithering out from between the ancient stones of Israel's Western Wall and chasing a pigeon has sparked fears that it was a harbinger of the Messiah.

To the applause of worshipers, a man ascended a ladder to catch the coin-marked snake, which is native to Israel and other Middle Eastern countries.

The reptile's Jerusalem appearance prompted speculation among some website and social media users, who made references to biblical prophecies.

A Hebrew-language site, Sod1820, pointed out to the fact that Israel is sometimes referred to as a dove in literature, and suggested that the symbol of a pigeon fleeing a snake proved that the Jews were living in “dangerous times.”

“We are truly in the dangerous times that directly precede Mashiach [Messiah], as the pigeon is safe so long as it seeks shelter among the stones of the Temple Mount, the Jews are protected by the Torah commandments. When the pigeon comes out from the stones or the Jews move away from the Torah, they are in danger.”

The same site also reportedly cited The Zohar, the basis of Jewish mystical thought, Kabbalah, as explaining that the “evil inclination, personified by the snake in Eden, will make a resurgence in the days before Messiah.”

The snake was not the first incident there this year: back in July, a huge stone dislodged from the wall and nearly fell on a woman praying below.