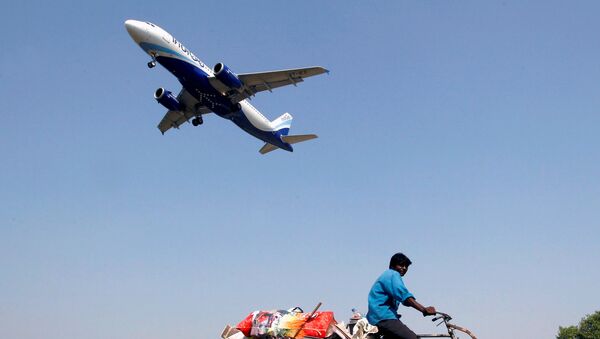 In the last six months, there have been at least six occasions in which commercial planes in India have come in such close proximity midair, triggering their onboard warning systems and forcing pilots to change direction to avoid collision.

Two commercial airplanes of India's biggest domestic carrier, IndiGo, flying at the same height came too close for comfort on Wednesday evening, near the India-Bangladesh airspace border, triggering a collision alarm. According to the Airports Authority of India (AAI), the planes were only 45 seconds away from a possible collision when the Air Traffic Control (ATC) tower in Kolkata instructed one of them to turn right and move away from the other aircraft.

"Both the aircraft, belonging to low-cost carrier IndiGo, had come on the same level on Wednesday evening and posed a threat to both the aeroplanes," a senior AAI official was quoted by the PTI.

The official said that the one aircraft was going to the northeastern Indian city Guwahati from Chennai in the south while the other had taken off from Guwahati for Kolkata.

Water Tanker Hits Doha Bound Qatar Airways Plane at Indian Airport
The Bangladesh ATC had asked the Kolkata-bound flight to descend to 35,000 ft and when the aircraft followed the order, it came close to the other aircraft which was also at 35,000 ft, the official said.

An ATC official in Kolkata saw it and immediately ordered the Chennai-Guwahati flight to make a right turn and move away from the path of the descending aircraft, averting a disaster. As per aviation rules, the standard separation gap between two aircraft, both vertical difference, and the lateral difference should be a minimum of 1,000 feet.

On Thursday afternoon, in a separate incident, a water tanker hit a Qatar Airways aircraft that was preparing to take off for Doha at an airport in Kolkata in eastern India. The plane was stationed at the airport and around 100 passengers were boarding when the incident took place.

In the aviation-safety audit conducted by the United Nations' International Civil Aviation Organisation (ICAO), India has slipped below neighbors like Myanmar, Bangladesh, Maldives, Pakistan, Sri Lanka, Nepal and even North Korea in the Asia-Pacific region in terms of air travel safety. India is one of the 15 countries that are below the minimum target rates.

— India slips below Pakistan, North Korea in air safety oversight.
— We are in the company of Tonga, Palau, Samoa, Papua New Guinea
— Also a US aviation regulator FAA stinker as it starts its India audit todayhttps://t.co/HKoKhN6ZkH #avgeek @icao @faanews @etprime_com