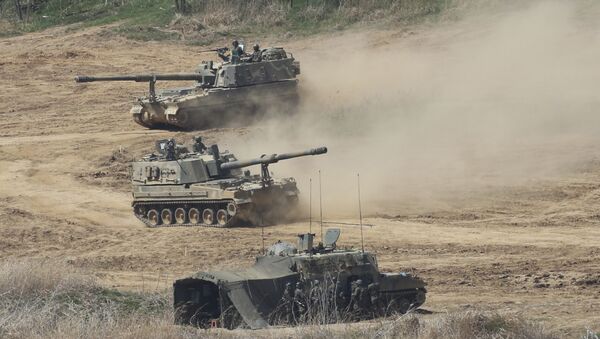 The Indian Army plans to replace all its field artillery guns with a variety of 155mm/52 caliber guns at a cost of over $6 billion by 2025 in order to equip artillery regiments that have barely seen new types of howitzers since the Bofors controversy three decades ago.

New Delhi (Sputnik): India's Minister of Defense Nirmala Sitharaman will hand over the first batch of K-9 VAJRA-T tracked, self-propelled artillery guns on November 9 to the Indian Army. The handing over ceremony will be organized at Devlali Field Firing Ranges, under the aegis of the School of Artillery Devlali, Nashik. Indian Army Chief General Bipin Rawat who has been fast-tracking the force's modernization program will accompany Sitharaman to the event.

India-Russia Military Cooperation to Soar Higher With New Technical Wing
The K-9 Vajra-T is a 155mm /52 caliber tracked Howitzer gun and a variant of the highly successful K9 Thunder modified for Indian conditions. The gun has 50 percent domestically-made content that includes the fire control system, hull, turret, electronics, NBC systems, autoloaders, air conditioning, and direct fire systems. However, the critical parts of the gun — the barrel and breach — were imported from South Korea.

The 47-ton K9 Vajra-T is powered by a German 1,000 hp MTU MT 881 Ka-500 V8 diesel engine which can fire up to 40 kilometers. The Indian Army had intended to own a howitzer with a high ground clearance that could be used across various types of terrain.

India to Add More Firepower to Soviet Era M-46 Field Guns
The Indian government has also ordered 114 Dhanush guns for induction into the army at a cost of $2 billion. Apart from that India is also set to induct 145 M777 155MM/45-caliber ultra-light howitzers from America's BAE Systems for approximately $750 million.

This would be the first set of new Howitzers to be handed over to the Indian Army in three decades as New Delhi had shelved all plans to contract for field guns after the Bofors scandal in the late 80's. The scandal revolved around bigwigs in the Indian government led by the Congress Party and officials from the Swedish government having received kickbacks from Swedish arms manufacturers AB Bofors in exchange for a contract to supply 400 155mm Howitzer guns for the Indian Army.