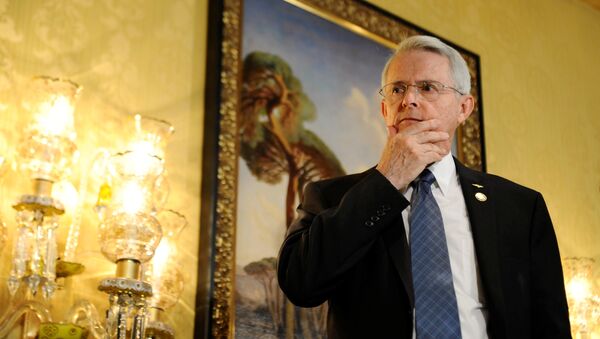 © REUTERS / Omar Sanadiki
Subscribe
International
India
Africa
Midterm elections in the US will be held on Tuesday, November 6. The outcome will determine whether the Republican Party maintains control of Congress. The midterms are also often seen as a referendum on the president’s performance. Sputnik asked Senator Richard H. Black, 13th District, Virginia for his predictions on mid-term elections.

Richard H. Black — Until recently, Democrats were poised for major gains in the U.S. House and perhaps a small chance at gaining control of the U.S. Senate. However, two major things have occurred that have aroused Republican interest in the election.

First, Democrats badly overplayed their resistance to Justice Kavanaugh, who won nomination to the U.S. Supreme Court. Second, a huge invasion of immigrants was organized in Honduras to burst through America’s southern border. Up to 7,000 Hondurans are being transported or walking to our border with Mexico. Most Americans are deeply concerned about uncontrolled immigration from third world countries.

If Trump Keeps Going With Agenda, Every Country Will Do Well - Arizona Candidate
Typically, midterm elections see about 40% voter turnout compared to 60% in presidential elections. However, midterms are extremely important. This year, the party in control of Congress will have great influence over drawing new election districts – something that only occurs after the census is taken every 10 years. Also, the ability of President Trump to enact his legislative priorities will depend on Republican strength in the House and Senate.

Because President Trump’s approval rating relatively good, he has had a favorable impact on Republican races in many areas. He has shown an ability to rally massive crowds that are often 12 to 20 times as large as those that Democrats can muster. Recently, President Trump’s rally in Houston Texas attracted 100,000 people. Because of their size, the Trump rallies provide free television coverage to Republicans. This helps to overcome the enormous financial advantage that Democrats always have in national political races. This year, in the 108 most competitive districts, Democrats have outraised Republicans by roughly 250%.

US Midterm Forecasts Call for Divided Congress as Races Hit Final Stretch
Although some have predicted that the election turnout will hit a 50-year record, I doubt that it will be that high. Democrat turnout will be high but the most recent indications suggest that it will not be truly extraordinary.

So far, early voting has heavily favored Republicans in Florida, Georgia, Texas, Arizona, Indiana, Montana, and Tennessee. Democrats have only been favored in in early voting in Nevada. Although this trend is impressive, it is not clear whether the large early voting advantage will be offset by even larger same-day voting by Democrats, who tend to show up in greater numbers at the polls on election day.

Unfortunately, the Democrats and Republicans are both quite enthusiastic about military spending and quite willing to raise tensions with China, Russia, and Iran. There is some possibility that if the Senate remains in Republican hands and Democrats take control of the House of Representatives, differences of opinion may arise over the wisdom of our bellicose attitude on the world scene.

One issue that could substantially alter American foreign policy would be a Democrat shift towards social spending, which could impose some limits on military spending.

The Russian collusion hoax appears to have been a preplanned effort by elements high within the CIA, the Department of Justice, and the FBI. By accusing President Trump of colluding with Russia to win his election, Democrats forced him to adopt an extremely aggressive approach toward the Russian Federation. This was unfortunate since Russia and the United States should be working closely on most of the major issues of concern to both countries.

Trump to Hold 11 Campaign Rallies Ahead of 2018 Midterm Elections
President Trump may feel less pressure over anti-Russian hysteria once the midterm elections are finished. The Russia-collusion allegations have largely been exposed as a hoax. Over the next two years, they should have less influence on President Trump. This will give him the opportunity to reset U.S.-Russia relations, if he wishes to do so.

For many decades, Democrats have had an enormous financial advantage in midterm elections. Most of America’s mega-billionaires are Democrats. The Republicans who are truly wealthy tend to be very moderate in their views. Since very few genuine conservatives have large amounts of money, liberals always have a tremendous advantage in federal elections.

Another important advantage for Democrats is their almost total dominance of the media. A major reason why Donald Trump won the presidency in 2016 is because Americans bypassed the broadcast media and communicated among themselves through social media networks. In reaction, the oligarchs who control Google, Facebook, Twitter, and Paypal, have vigorously worked to censor alternative media that was relied upon by American conservatives. This effort is likely to have a profound, negative impact on the ability of Americans to freely express their views. We see similar efforts taking place in other countries across the globe. This will undoubtedly diminish the hopes of ordinary citizens to influence the policies of their national governments. It is a very sad development for Americans and for people in many other countries.

Midterms: Most Violent Rhetoric Comes From Democrats - Ex-CIA Officer
Fortunately, this year the Republicans have a major advantage in the elections for the U.S. Senate. One-third of U.S. Senators are elected every two years. This year, Democrats are defending three times as many seats as Republicans. Even in a difficult year for Republicans, the mathematics make it very difficult for Democrats to win a majority of the Senate this year.

Whatever happens next Tuesday, the results will have a profound effect on the future policies of the United States. A shift in power could effect policies on immigration, tariffs, taxes, redistricting, and defense spending.