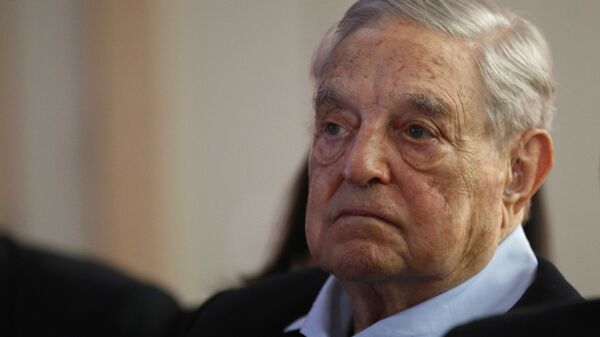 George Soros, a Hungarian-born US magnate and investor, is known for advancing a globalist agenda throughout the world. These liberal efforts have faced opposition in Europe, when Soros-funded Open Society Foundations was forced to leave Hungary, and when Trump's former advisor kicked off a right-wing political initiative in Brussels.

According to a New York Times report, George Soros has channeled $1 million to the Democracy Integrity Project, a civil rights organization which used the research group Fusion GPS as a contractor in a quest for dirt on Donald Trump during the 2016 presidential campaign.

Fusion GPS, in turn, hired Christopher Steele, a former MI6 officer-turned-investigator, to compile a dossier on the alleged Russian meddling into the 2016 US presidential vote and collusion with Donald Trump campaign, which both Russia and Trump denied.

Steele's private report contained unverified claims of conspiracy between Donald Trump's presidential campaign and the Russian government before and during the 2016 election. Trump's former lawyer Michael Cohen, who Steele said had travelled to Europe to meet with Russian officials, has denied all the allegations.

This comes as a follow-up to last year's scandal, that broke out after reports that the Democratic National Committee and the 2016 Democratic presidential candidate Hillary Clinton helped fund the infamous dossier through the law firm Perkins Coie.

That Soros had indirectly funded Fusion GPS through a grant was acknowledged by his spokesman a month ago.

The 88-year old investor, known as the man who "broke the Bank of England," has doubled down on his efforts to support Democrats ahead of the 2018 midterms. Soros also got embroiled in a confrontation across the Atlantic after his Budapest-based Open Society Foundations' (OSF) headquarters was forced out of Hungary.