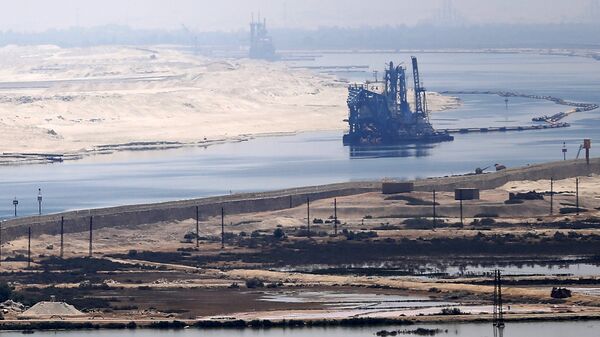 Earlier, Indian Commerce and Industry Minister Suresh Prabhu called for the International North-South Transport Corridor (INSTC) to be put into operation "as early as possible." The INSTC's estimated operational capacity is up to 30 million metric tons of goods per year.

Russia, India and Iran will meet later this month to discuss the operation of the 7,200-km International North-South Transport Corridor (INSTC), which is seen as "a cheaper and shorter alternative to the traditional route through the Suez Canal," according to the Iranian news agency Press TV.

The Indian Ministry of Commerce and Industry touted the INSTC as "the shortest multimodal transportation route linking the Indian Ocean and Persian Gulf via Iran to Russia and Northern Europe."

The new project will involve both rail and sea transport. Indian goods will be delivered to the Iranian city of Bandar Abbas on the Persian Gulf coast, then to Iran's Bandar Anzali near the Caspian Sea, from which they will be sent across the Caspian Sea to the Russian city of Astrakhan and then by rail to Europe.

Compared to the Suez Canal, the INSTC will reduce the transport time between India's Mumbai and the Russian capital Moscow by about 20 days.

Iran Calls for Crucial Meeting on International North-South Transport Corridor
On the whole, the new route will reduce the time and cost of delivering goods by more than 40 percent in comparison with the Suez Canal. The annual estimated capacity of the INSTC will stand at between 20 and 30 million metric tons of goods.

During a meeting with a Russian business delegation in New Delhi last Saturday, India's Union Commerce and Industry Minister Suresh Prabhu underscored that "all issues may be resolved in order to operationalize the [INSTC] route as early as possible."

The first two trial deliveries through the new transport corridor were conducted in August 2014 and April 2017.