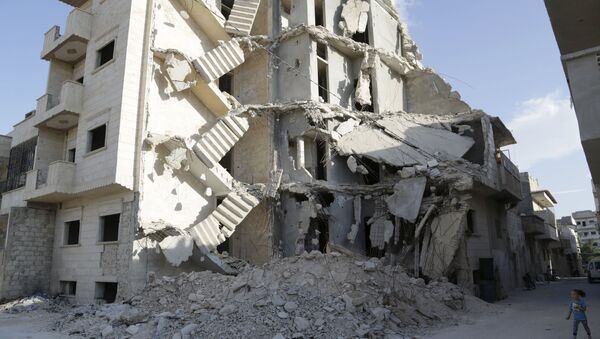 MOSCOW (Sputnik) - Militants are preparing new provocations with the use of chemical agents in the Idlib de-escalation zone in Syria, the head of the Russian Center for Syrian reconciliation said Thursday.

"According to information received by the Russian Center for Syrian reconciliation, militants from the Ahrar-ash-Sham and Jaish al-Izza groups are preparing new provocations using chemical agents," Lt. Gen. Vladimir Savchenko said at a daily news briefing.

White Helmets Hiring Locals for Staged Chemical Attacks, Paying in Food - MoD
"The terrorists delivered two containers with chlorine to a granary in the northern part of the settlement of Kalyat al-Mudik, located 20 kilometers west of the city of Hama. They are planning to use this chemical agent to stage a fake chemical attack against civilians by the Syrian government forces," the general said.

On October 27, the Russian Center for Reconciliation in Syria reported that it received information from locals that terrorists from the Islamic Party of Turkestan* had transferred twenty 10 liter containers of chlorine for use in false flag attacks in Maarrat al-Nu'man, a city in Idlib province.