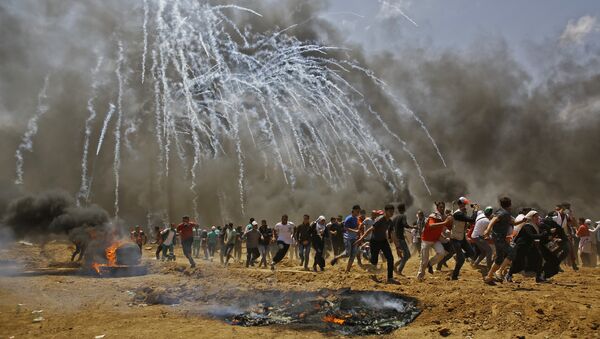 © AFP 2023 / MOHAMMED ABED
Subscribe
International
India
Africa
On Sunday evening, an Israeli airstrike killed three young Palestinian boys near the fence that separates Israel from Gaza. Israeli authorities said that one of their aircrafts rocketed the boys, two aged 13 and one 14, while they were planting explosives.

Palestinian authorities, however, called that claim nonsense and said the boys were peacefully protesting.

Dan Cohen, a journalist and a documentary filmmaker with extensive experience in the Middle East, joined Radio Sputnik's Loud & Clear Wednesday to discuss how, in addition to airstrikes on innocents, Israel is punishing Palestinians by barring their access to proper health and sanitation facilities.

​"The war on Gaza is in all aspects. It's not only shooting unarmed protesters on the border, it's not only have drone strikes on children, it's an all-out, economic warfare in every way possible," Cohen told hosts John Kiriakou and Brian Becker.

"We see it playing out in a number of ways. These three boys were targeted apparently by a drone strike. So essentially, they presented no threat to Israel, and they were just killed, and it doesn't even really register in western media. We can only imagine the outrage we would be seeing if it was the other way around. If Palestinians had killed three Israeli boys, we would see condemnations from [US President] Donald Trump, [US Vice President] Mike Pence, and we'd see the west up in arms, but it doesn't even make a blip on the radar when Palestinians are killed by Israel," Cohen added.

"There is also this horrific issue of dirty water that is now creating disease in the Gaza Strip, and that goes back to a long term policy of Israel's de-development. Back in 2014, during the 51-day war on Gaza, Israel directly targeted the sewage treatment plants, and so those do not work," Cohen noted.

According to Palestinian Water Authority tests, up to 70 percent of the desalinated water in Gaza is contaminated by feces. In addition, Gaza's aquifer is severely contaminated with disease-causing nitrates from sewage, which either infiltrates the aquifer or goes into the Mediterranean Sea because Gaza's sewage plant is shut down due to limited electricity.

"I actually visited those [sewage plants], and there is no military use for these things. It's just to make sure that Gaza cannot treat their sewage, and so it gets so bad that you have children dying from swimming in the sea where raw sewage is pumped out in massive amounts. When I was living in Gaza, I was in this hotel, and it was on this beach, but because they are not allowed to treat their sewage, the sewage pumps put into the Mediterranean Sea. Palestinians in Gaza are living under this brutal, decade-long siege," Cohen added.

The land, air and sea blockade of the Gaza Strip was imposed by Israel and Egypt in 2007. Israel opted to impose the blockade following Hamas' move to take control of the territory. According to Israel, the blockade is meant to prevent weapons and various other military equipment from falling into the hands of Hamas. However, the blockade has also contributed to the collective punishment of around 2 million Palestinians living in Gaza.

"The social, health and security-related ramifications of the high population density and overcrowding are among the factors that may render Gaza unlivable by 2020, if present trends continue," the UN report states. "Reconstruction efforts are extremely slow relative to the magnitude of devastation, and Gaza's local economy did not have a chance to recover."

According to Cohen, Israelis are well aware of the dire sewage problem in the Gaza Strip.

"This [the problem] came into Israeli consciousness about a year ago, because the sewage problem got so bad that the sewage in the sea was drifting towards beaches around Tel Aviv. It became a problem for Israelis, and so the talk was about, maybe we should do something, maybe we should allow them [Palestinians] to rebuild their sewage plants. It's not like it's some big secret that Gaza is in complete crisis and it has been for years and years. Almost no one cares in Israel, or they support it and see it as a way to achieve their goals. Basically the idea is to make life so unbearable in the Gaza Strip that people just flee, but, of course, they can't flee, because there is nowhere to go," Cohen explained.

"So this is the big contradiction. On one hand, Israel covets that land in the Gaza Strip, but on the other hand, it doesn't have anywhere to send [Palestinians]. Europe certainly doesn't want more refugees. And how it plays out? Well, lock 2 million Palestinians in a prison and keep them under these horrible conditions, and maybe at some point, Israel will find some way to expel them. They've talked about expelling them into the Sinai desert, which is part of Egypt, but that's not a political reality that can happen right now," Cohen added.

When asked what Israel's endgame is, Cohen responded, "Israel doesn't really have an endgame."

"The idea is to keep Gaza hovering above complete, 100 percent destruction but also to punish it severely for any form of resistance," Cohen concluded.