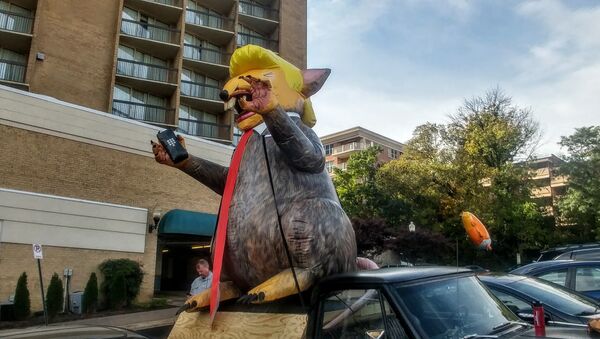 © Alex Rubinstein
Subscribe
A pair of Republican political operatives vowed to reveal “the first” of an alleged string of sexual assault victims of US Special Counsel Robert Mueller, but the alleged victim never showed up. The nuts and bolts of the case, reporters noticed, were also missing.

The men investigating what they say are a woman's claims that special counsel Robert Mueller, currently the chief investigator into whether there was collusion between members of the Trump campaign and Russia, had raped her eight years ago presented their case to the press on Thursday.

"This is my partner Jacob Wohl, who is my partner in this important investigation," Jack Burkman, 52, began the press conference. Burkman is a lobbyist who in 2014 pushed for a bill he authored that would ban homosexual NFL players from the league. In 2017, he funded his own investigation into the killing of Democratic National Committee staffer Seth Rich, whom conspiracy theorists believed was murdered after leaking emails from the organization. Now, the two say they are investigating claims that Mueller raped a woman eight years ago in New York.

Burkman's latest campaign began just after midnight October 30, when Wohl, 20, tweeted that "several media sources tell me that a scandalous story about Mueller is breaking tomorrow. Should be interesting. Stay tuned!"

Burkman tweeted some 12 hours later that he would hold a press conference on Thursday and "reveal the first of Special Counsel Robert Mueller's sex assault victims."

Also on October 30, the Gateway Pundit, a popular conservative website to which Wohl has contributed, published documents provided by an "international private intelligence" firm, which it said supported "very credible allegations" that Mueller had raped a woman.

That firm turned out to be Surefire Intelligence. Hours later, Gateway Pundit took the documents down, saying that it was looking into allegations against Wohl. After the press conference, Gateway Pundit suspended their "relationship with Jacob Wohl."

As journalists began looking into Surefire Intelligence, less and less seemed to make sense. Wohl, prior to the press conference, claimed to not be involved with the firm. Photos of most of the employees listed to the firm on LinkedIn turned out to have been stolen from prominent people; the phone number provided on the website directed calls to Wohl's mother.

Wohl blamed the company's bizarre LinkedIn presence on trolls during the press conference. When confronted by members of the media for lying to them over the past few days, he chalked the confusion up to the investigation being "in flux." It's "no secret this is a matter of sensitive — of sensitive nature and great import. It was important that I was able to preserve my involvement with this as I was finalizing the final details."

As Burkman and Wohl began to tease their claims about Mueller, a number of journalists began revealing emails they had received in recent weeks from a woman, whose name was initially redacted but later identified by Wohl and Burkman as Lorraine Parsons. Parsons reportedly told various journalists that a man named Bill Christensen had offered her, in total, $54,000 to fabricate sexual abuse allegations against Mueller.

Reporters have been unable to contact Parsons, and those who reported getting the emails about Mueller from her said her unavailability and other aspects of her story made them doubt its veracity.

Another woman, law professor Jennifer Taub, says she was also contacted by a man who said he worked for Surefire Intelligence on October 22, who offered to compensate her if she would make up claims against Mueller.

In previous cases, Burkman has publicly offered large sums of cash in exchange for dirt on the FBI, for example, or in other matters. At the press conference, Burkman and Wohl claimed that Parsons is not a real person. On Twitter, Wohl has floated the idea that she is an invention of "Mueller's goons."

Wohl and Burkman had promised to deliver the goods on sexual abuse allegations against Mueller at the presser, but the media in the room was not buying it. The accuser — named by Burkman and Wohl as Carolyne Cass — left DC in the morning out of fear for her safety, Burkman said. She "has received a number of threats. She is frightened — frightened for her life and will not be with us today," he said at the beginning of the presser.

Wohl said "there's been many death threats. I received hundreds of them. Hundreds of death threats. People have threatened to come here and cause harm. Lunatics have shown up, as we can see based on the display out in the parking lot."

Wohl was referring to an inflatable rat resembling US President Donald Trump that was propped outside the Holiday Inn, where the press conference was held. He had previously blamed the rat on "antifa" in a tweet, but Claude Taylor, who owns a political action committee (PAC) called MadDogPAC, was the one who put it there. Taylor told Sputnik News his PAC is "anti-Trump."

Asked for additional information about Cass, including the names of her parents, Wohl told a reporter that he would not give out names of her family members so that they could be harassed.

One person in the back of the room noted that Wohl should not have published their numbers as contacts on the Surefire Intelligence website if he were concerned about people calling them.

Burkman passed a "Confidential Raw Intelligence Document" out to the media in attendance, including Sputnik News. The document outlined the specific allegations against Mueller. Wohl and Burkman claim the incident happened on the week of August 2, 2010, but said that they could not pinpoint the specific date. The "raw intelligence" document claims it happened "on or about August 2." 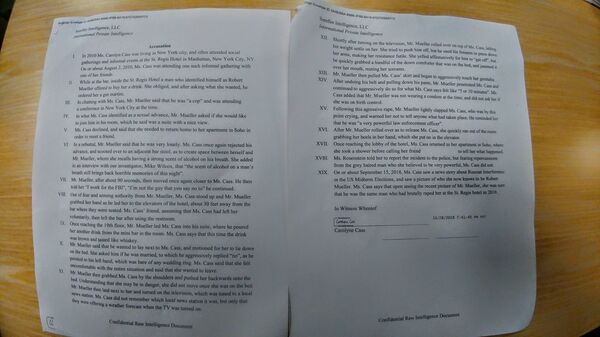 During the presser, Burkman was confronted by a reporter after he said that the special counsel's office had "leaked" that Mueller was attending jury duty in New York City at the time of the alleged rape. The reporter pointed out that the source of the information was actually a Washington Post article from 2010. That article was dated August 3.

"Sometimes people go to jury duty, but they are also somewhere else," Wohl replied, prompting laughter from the media. Another document, an FBI press release from 2010, was passed around by the duo and included a picture of Mueller, who was then the director of the FBI, attending a cybersecurity conference some time between August 2 and August 5, 2010.

"Jacob is one of the brightest and most capable and competent people I've ever met," Burkman said. "I think Jacob is a child prodigy that has eclipsed Mozart."

Burkman said that they decided to hold the press conference after they were done vetting Cass, but stressed that their investigation was not yet complete.

Wohl said he first came into contact with Cass after she hired his private intelligence firm to investigate an estate matter. It was a "raging success," Wohl said.

After that, Wohl said Cass saw a news report that mentioned Mueller. "Upon seeing his face on one of the seldom occasions she watches the news, she knew that that was the man," Wohl said. "She then reached out to me because she knew I had the wherewithal to parse through this and figure out whether or not there was anything to it. Maybe she was wrong," Wohl said.

According to Burkman and Wohl, Cass' claims were thoroughly investigated and turned out to be true. Journalists in the room, however, found the claims questionable.

That conclusion is not wholly due to Burkman and Wohl's history of spreading conspiracy theories.

"Around September 15, Miss Cass contacted me and my firm with this story," Wohl said. When asked when he founded Surefire Intelligence, Wohl said he began doing "investigation jobs for fun" some time ago, but that he has used "several corporate structures" and incorporated Surefire in Delaware "a month or two ago." According to Natasha Bertrand, who reports for The Atlantic, Surefire Intelligence was actually incorporated less than three weeks ago — after September 15. The primary document passed around by the pair included an affidavit from Cass signed on October 28.

"Robert Mueller has ordered the FBI to go after the accusers," Wohl said. Mueller referred the issue to the FBI this week, but there is no indication that there is any kind of investigation afoot.

"This is an attempt by the media to do the bidding of Robert Mueller," Wohl said.

000000
Popular comments
I was reading an interesting article which said that Mr. Mueller was in charge of the FBI when they were thwarting police investigations into Whitey Bulger while he was still in the gangster business many decades ago. Apparently it is a miracle that Mr. Mueller did not go to jail over this but two of his subordinates did. www.thegatewaypundit.com/2018/10/mueller-connected-boston-mobster-whitey-bulger-killed-in-prison-as-