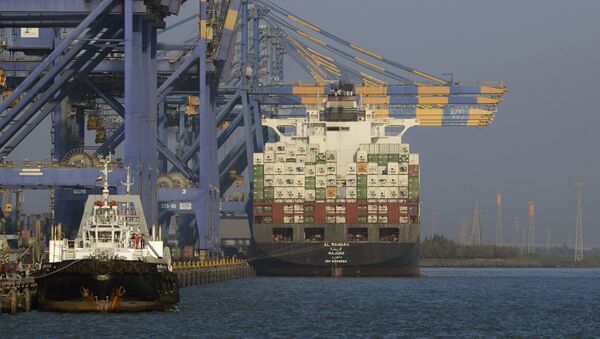 © AFP 2021 / SAM PANTHAKY
Subscribe
The Indian government has rushed to open the port of Chabahar in southeastern Iran before new US sanctions begin in November. While India has sought a waiver from the US for trade at the port, an Indian historian told Sputnik that the sanctions will fail, and the countries of southern Asia will find a new future separate from the US.

India has sunk $500 million into developing two ports in Chabahar and another $2 billion to build a rail link with the city of Zahedan, capital of Iran's Sistan-Baluchistan Province, 430 miles inland. A further project will link Zahedan with Zaranj, just across the Afghan border, and provide a transport corridor for iron ore coming out of the Hajigak mining concession, granted to India in 2016 in central Afghanistan, Sputnik reported.

However, that project has now been put in danger by the US pulling out of the Joint Comprehensive Plan of Action (JCPOA) in May, a 2015 agreement that lowered economic sanctions against Iran in exchange for a cessation in their nuclear weapons program. US President Donald Trump, claiming violations by the Iranians, unilaterally pulled out of that agreement, and the US Treasury reinstated strangling economic sanctions in two waves: the first went into place in August, and the second, stronger restrictions will began on November 4.

Despite the US withdrawal, the remaining signatories to the JCPOA — Britain, France, Germany, China and Russia — have pledged to continue to operate under its guidelines, effectively snubbing US threats of punishment if they violate US-imposed trade restrictions. Other countries, from Iraq to Turkey and beyond, have also balked at the idea of ending trade with Iran, although some have rearranged their trading arrangements, such as the Chinese, who now agree to buy Iranian oil only if it's shipped to them in Iranian tankers that assume the costs and risks involved, Sputnik reported.

Radio Sputnik's Loud and Clear spoke with Vijay Prashad, director of the Tricontinental: Institute for Social Research, chief editor of LeftWord Books and author of numerous books including "Red Star Over the Third World" and "Everybody Was Kung Fu Fighting: Afro-Asian Connections and the Myth of Cultural Purity," about the issue of Chabahar, what the port means for India, and where US sanctions against Iran will push the region politically and economically.

https://www.spreaker.com/user/radiosputnik/construction-of-chabahar-port-has-major-
Prashad explained that Afghanistan, being landlocked in Central Asia, relies on surrounding countries to permit it to import and export goods. Hemmed in on all sides by mountains and deserts, that's not an easy feat regardless of the direction of shipment. While it's traditionally relied upon either Pakistan or China (via Uzbekistan and Kyrgyzstan) for access to the sea, Prashad noted that in the last 10 to 15 years, Afghanistan has steadily increased its trade with Iran, even buying Iranian oil during the years of sanctions against Iran.

In turn, India's rapidly growing economy increasingly seeks access both to Afghan goods and to Central Asian markets further inside the continent. Iran, likewise, has sought "to deepen its regional partners" in order to frustrate any attempts by the US to isolate it once more, such as was the case between 2006 and 2015, when the United Nations had placed economic sanctions on trading with the country.

And that's exactly what's happened, Prashad said: US efforts to place Iran back in the vise of sanctions have been "frustrated by these regional entanglements."

That's also why India is now seeking to obtain a waiver from US sanctions for cargo traffic through the port of Chabahar. The second round of US sanctions is due to begin November 4 and will include punishments for those who buy Iranian oil, among other exports.

"In a sense, the United States government is like a human being who's put its hand inside a bees' nest and is unable to extricate it, you know, constantly getting bitten over the last 17 years around the question of what to do about Afghanistan. There has been no strategic clarity over Afghanistan and the US war there, and indeed, this is demonstrated by the fact that the United States has decided to once again isolate Iran, which had played a very important stabilizing role in parts of, particularly, eastern Afghanistan."

"The idea that the United States is going to look at this, whether from the Pentagon side or the White House side, rationally, I think should be set aside. I think even the Pentagon has not been bold in its understanding that this war in Afghanistan is an utter failure and that Iran has to play a very important stabilizing role alongside, I think, not a choice between India or China but alongside India, China and Pakistan. All four of these regional countries have to play a role in the stabilization of Afghanistan. I think there is an appetite in the new Pakistani government for something like this. I think that, if the Indian government is shown the road, it might accept that there is a way for India, Pakistan, Iran and China to stabilize Afghanistan."

"You've got to understand that India has got a very large stake in an iron ore mine in Afghanistan. This is a very important raw material for the Indian economy, for Indian big business. And Indian big business has been putting pressure on Delhi to make some kind of deal with the United States to get this port out of the sanctions register and to bring some stability in Afghanistan. Business doesn't always like war, even though war is extremely good for business."

However, "it's not just this port," he said. "The Chabahar port plays a very important role in India's strategic interests — and it should be said that there is an element of minor power jostling here, as well: because the Chinese and the Pakistanis have developed the port at Gwadar, which is just down the road from Chabahar, another port that would link Afghanistan to the Indian Ocean — but of course through Balochistan, an area, again, of instability. But it's not just this port: it's also oil. And it's again not just India: it's China, it's Japan, Sri Lanka — I mean, countries in the Indian Ocean and in the South China Sea rely on Iranian oil. And they are unwilling to pivot, and each of these countries are looking — and they've even started looking, spoken of, creating an alternative banking system."

"I think it's important to recognize that the US government cannot prevent people from buying Iranian oil. That's not sanctioned. What's sanctioned is the ability to pay for it — in other words, the use of American-dominated banking systems and of the SWIFT network, the wire service that is based in Belgium. I mean, that's the problem: the problem isn't getting the oil to your country, it's how do you pay for it. So these countries, including Japan, have been openly talking about an alternative banking system. It seems to me that when the Trump administration puts these new sanctions in place in November, it's going to find that very large parts of Asia, and even the European Union, is not willing to go along with the sanctions, and they are looking for ways to go around them. So I'm afraid these sanctions, which are very tough in the letter, might end up being a damp squib for the Trump administration."

Prashad said that "countries like India are going to be left in the cold" if the BRICS (Brazil, Russia, India, China and South Africa) block falters. He noted that Brazil's new president, Jair Bolsonaro, has spoken of leaving the block, and that Russia and China seem to be "going their own way," forming a partnership between themselves on economic, military and geopolitical matters. In such a situation, India is "going to have to decide: do they want to be subordinate allies of the United States, or do they want to have some sort of regional framework by which they can improve the situation of their own economy, whether it's just the elites or even the middle class? So I think with the destruction of the BRICS block, which is imminent, India is going to have to seriously consider its regional landscape, and that's going to mean coming to terms with the overture from Pakistan," he said, noting that Pakistani President Imran Khan has made an overture to the Indian government.

000000
Popular comments
Good to see India has come to their senses.