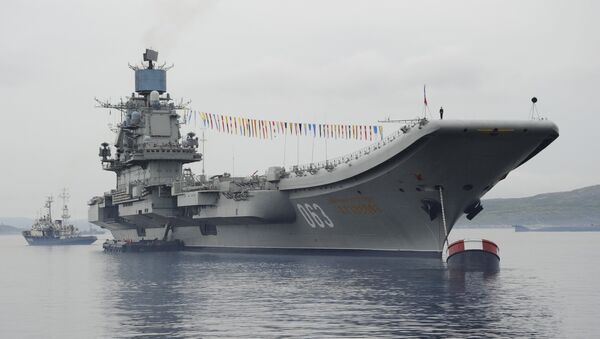 HAVANA (Sputnik) - An interdepartmental commission to investigate the causes of the incident involving Russia's only aircraft carrier Admiral Kuznetsov has been created, while steps to avoid delays in the ship's overhaul are being considered, Deputy Prime Minister Yuri Borisov said.

On Tuesday, floating dry dock PD-50 sank at a shipbuilding plant near Murmansk, which performed overhaul of Admiral Kuznetsov. Russia's United Shipbuilding Corporation (USC) later reported that during the incident a crane fell on the ship leaving a hole the size of 4 by 5 meters in its hull.  Admiral Kuznetsov was towed to a repair yard outside the 35th shipbuilding plant in Murmansk where its overhaul will continue.

"I have already been informed about it, and have given instructions to form a commission that will determine the causes of the incident, the cost of damage, and will outline a plan of measures for restoration,” Borisov, who is currently on an official visit to Cuba, told reporters.

Russia
WATCH Footage of Admiral Kuznetsov’s Dry Dock Submerged
According to Borisov, the commission will involve officials from the Defense Ministry and the Ministry of Industry and Trade.

"The most important thing now is not to allow any delays in Admiral Kuznetsov's current overhaul. There is a strict schedule of the aircraft carrier's return to the Russian navy, and we will do all it takes to keep this schedule intact," Borisov stressed.

Borisov, who oversees the defense sector in the Russian government, also said that the commission will determine whether the sunken dry dock, which is the size of the Red Square in Moscow, should be raised from water or not.

"This will also be decided by the commission, but more likely yes than not," he said answering a relevant question.

Borisov also said that victims of the incident will receive compensation.

"The necessary assistance will certainly be provided to the [shipbuilding plant] employees, victims," Borisov told reporters.

Admiral Kuznetsov was towed to a repair yard outside the 35th shipbuilding plant in Murmansk where its overhaul will continue.