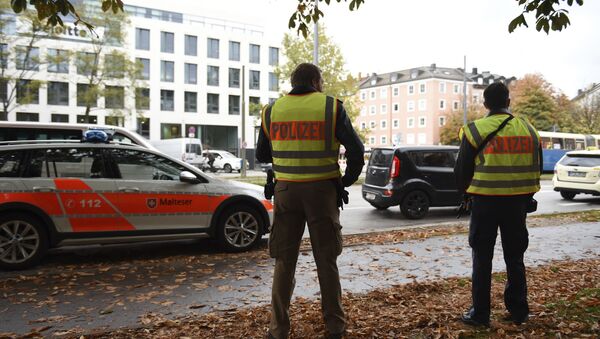 © AP Photo / Andreas Gebert
Subscribe
Six young men from Afghanistan are suspected of sexually assaulting a 15-year-old, according to Bavarian public radio. The incident was reported shortly after a group of Syrians allegedly gang raped a teenage girl in the southern German university town of Freiburg, prompting thousands of protesters to take to the streets.

Bavarian police have detained five men, aged from 20 to 25, who are suspected of raping a 15-year-old schoolgirl in Munich, Bavarian public radio and Abendzeitung report. One suspect is wanted in connection with this crime. According to the reports, they are asylum seekers who came to Germany from Afghanistan.

The assault allegedly happened late in September. The socially challenged 15-year-old was befriended by one of the suspected rapists. The schoolgirl reportedly testified that the man forced her to have sex with him. She didn’t defend herself out of fear that they would beat her. She is also said to have been assaulted by five other men, who were acquaintances of her friend.

According to Abendzeitung, the raping allegedly continued for an indefinite time span in several apartments in Munich. The prime suspect denies the allegations, claiming the sex was consensual. Munich’s public prosecutor's office has confirmed the detention to the outlet but declined to give any further details for the sake of the investigation, which is underway now.

However, Bavarian public radio says that there are no indications that the student was held in the apartments or gang raped. The outlet cites their police expert Oliver Bendixen as claiming that this was not comparable to the recently-reported case in the neighboring state of Baden-Wurttemberg.
There, in the city of Freiburg,  seven Syrians, aged 19 to 29 and living in refugee camps, as well as one German citizen were arrested and charged with raping an 18-year-old student. The men had been on the radar of local police long before the arrest in connection with other unresolved crimes.

The alleged gang rape prompted protests, partly organized by Germany's populist AfD party.  Thousands took to the streets, demanding that the police combat migrant crime and a reversal of Chancellor Angela Merkel’s permissive migration policy. They were challenged by violent left-wing counter-protesters, who assaulted the anti-migration demonstrators as well as local police.