Russia Will Resolutely Protect Rights of Its Compatriots Abroad - Putin 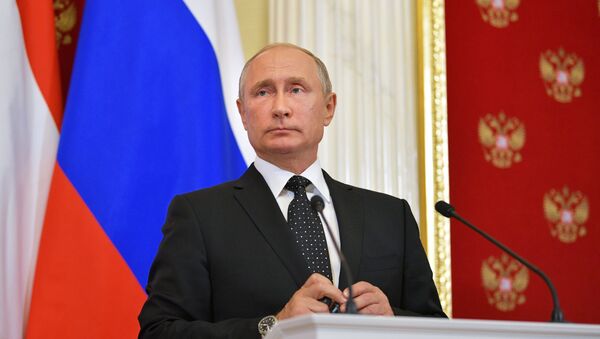 Speaking to forum delegates in Moscow on Wednesday, Putin emphasized that Russia would "resolutely protect your rights and interests, using all existing bilateral and international mechanism to do so."

Such assistance, according to Putin, will include continued material support for the Fund for the Support and Protection of the Rights of Compatriots Living Abroad, an organization aimed at providing support for the estimated 30 million Russians living outside Russia, including legal assistance.

Putin noted that the world is presently in a difficult situation, with tensions and unpredictability growing, and the foundations of international law being undermined. "Russophobia and other forms of extreme, aggressive nationalism are being used," particularly in Ukraine and the Baltic countries, as well as a number of other states, Putin said.

Russian Church Vows Tough Response to Constantinople Over Split Ukraine Church
"History is being rewritten, a struggle with monuments is being waged, as well as one with the Russian language. People are being intimidated and simply terrorized. The natural desire of each person to preserve their national roots is declared to be a crime…The right to freedom of speech, to the preservation of one's traditions is being grossly violated," he added.

Putin also commented on what he characterized as an alarming tendency toward politicking in the sphere of interethnic and interfaith relations, which he warned can only lead to grave consequences.

"Unfortunately, [there are forces] trying to break these bonds, to pull everyone apart into their own 'national apartments'. I want to emphasize that playing politics in such a sensitive area has always led to profound consequences, first and foremost for those who engage in it," the president said.

According to Putin, Russia would always welcome all compatriots who would like to settle in Russia on a temporary basis, or those deciding to obtain citizenship and move to Russia permanently. "For those who are unlawfully persecuted and threatened, we will do everything in our power to ensure their protection and provide asylum," he said.

Russia, Putin said, has tasked itself with ensuring sustainable, long-term growth and development, and compatriots abroad are able to contribute to this work.

Lithuanian Family Branded as 'Russian Invaders' During Visit to Latvia
Accordingly, the president has signed a new concept on migration policy aimed at providing comfortable conditions for the resettlement of compatriots abroad to Russia, as well as creating clearer rules for entry, obtaining the right to live, work and more easily acquire Russian citizenship without as much bureaucratic red tape. There were still problems to be worked out, Putin said, but the government would work with compatriots to resolve them.

According to the president, the program launched in 2006 aimed at easing conditions for people seeking to move to Russia has led to about 800,000 people moving to 66 regions across Russia, with numbers of those wishing to do so growing.

"In conclusion, I would like to emphasize that we are sincerely interested in your success, prosperity and happiness. And whatever country you are in, we are always prepared to provide you will all possible support. We know that you are doing everything possible to strengthen the Russian civilization, to establish a constructive dialogue between nations. And I would like to assure you — this is our common goal," Putin concluded.