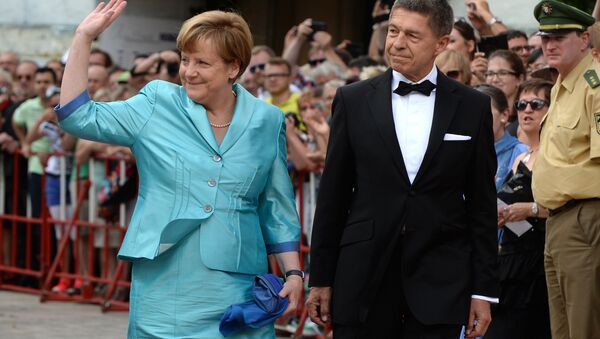 © AFP 2021 / CHRISTOF STACHE
Subscribe
Following the CDU's poor performance in Germany's most recent regional election, Chancellor Angela Merkel announced that she would give up the party leadership and wouldn’t seek re-election in 2021. After the German media named four candidates poised to potentially step into 'Mutti's' shoes, a critic of Merkel has taken the lead in the polls.

Former German Foreign Minister and former Social Democrats leader Sigmar Gabriel has stated in his article for Die Zeit that Chancellor Angela Merkel would resign long before the end of her term in 2021. According to him, the so-called “Jamaica coalition” of the black CDU/CSU bloc, yellow Free Democrats and the Greens would govern the country instead of the incumbent grand coalition with SPD.

“Probably, Angela Merkel’s giving up the CDU leadership is only the first step towards making way for the 'Jamaica coalition' CDU/CSU, Free Democrats and the Greens with the chancellor’s resignation. This would be the case after the European election in May 2019 at the latest,” he wrote.

However, Gabriel excluded the possibility of snap elections in case of her resignation. He also called on his own SPD to have a completely “fresh start” and advised adopting “radical social democratic realism.” However, he warned the SPD against rushing out of the grand coalition, “overthrowing the country in a government crisis” despite recent defeat in the regional elections in Bavaria and Hesse and poor poll results.

If Gabriel’s predictions come true, Merkel’s successor in the CDU might take charge of the government in less than a year.  Following her announcement, several prominent CDU figures reportedly voiced their intentions to enter the race for the key party post and, eventually, lead the German government.

This list includes the CDU's General Secretary and Merkel’s loyal ally Annegret Kramp-Karrenbauer, German Health Minister and an outspoken critic of the incumbent Chancellor Jens Spahn, and the former leader of the CDU group in the German parliament, Friedrich Merz. Additionally, some German media sources named Minister President of the German state of North Rhine-Westphalia Armin Lasche as a possible mediator candidate.

Recent polls for the German outlets Spiegel and Handelsblatt show that most respondents endorse Merz as Merkel’s successor. According to another survey by RTL/n-tv-Trendbarometer, Merz is going head-to-head with Kramp-Karrenbauer with 45 and 46 percent support respectively. However, more repondents, who support the Social Democrats, see Merkel’s ally as their party leader rather than Merz.

The former leader of the CDU group in the German parliament, Merz, is known for his calls for migrants to assimilate and adopt traditional German values.  He is seen as hailing from the conservative wing of the party.

He was ousted from his leading position in parliament shortly after Angela Merkel overtook the CDU leadership and has had a long-running feud with the Chancellor. Among others, he has criticized her for dragging the party to the left. After quitting parliament, he has been a board member of several companies, including the US hedge fund BlackRock, and reportedly has wide connections in the finance world of Wall Street and London’s City as well as among US senators.