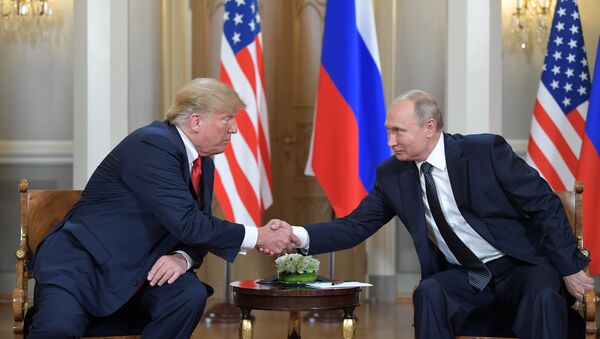 © Sputnik / Sergei Guneev
/
Go to the photo bank
Subscribe
Earlier, Russian diplomat Andrei Belousov confirmed that Russia is preparing to defend its territory against any aggression, while the unilateral withdrawal from the INF Treaty by the US signals that Washington is preparing for such aggression.

Russian Foreign Minister Sergey Lavrov did not rule out the possibility that the issue of the Intermediate-Range Nuclear Forces (INF) Treaty would be addressed at the upcoming talks between Russian President Vladimir Putin and his US counterpart Donald Trump.

"Everything will be discussed when they meet," Lavrov said answering the question on whether the two leaders would address the issue at meeting on November 11 in Paris.

The minister added that Washington had sent its questions to Moscow on its INF-related concerns several days ago.

'The INF Treaty Doesn't Include China That's Why US Feels Its Outdated' - Prof
Lavrov's statement follows an earlier announcement of Andrei Belousov, deputy director of the Russian Foreign Ministry's Department of Nonproliferation and Arms Control, that Washington is "preparing a war," and that Russia has to get ready to defend its territory, principles and values.

Earlier this month, US President Donald Trump announced his country's intention to withdraw from the INF Treaty over Russia's alleged violations of the accord.

The INF Treaty is a Cold War-era pact signed by then-leader of the Soviet Union Mikhail Gorbachev and then-US President Ronald Reagan in 1987. The two sides reached a historic agreement to cut their nuclear arsenals and pledged to destroy all cruise or ground-launched ballistic missiles with ranges between 310 and 3,400 miles.