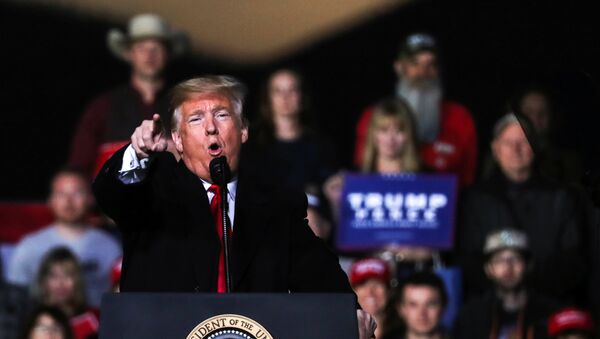 © REUTERS / JONATHAN ERNST
Subscribe
International
India
Africa
US President Donald Trump said Wednesday during comments at the White House that 15,000 US troops could be deployed to the US-Mexico border to block the migrant caravan from entering the country. That's more US soldiers than are presently deployed in Afghanistan.

Trump Claims US House Speaker Ryan ‘Knows Nothing’ About Birthright Citizenship
"We'll do up to anywhere between 10 and 15,000 military personnel, on top of Border Patrol, ICE and everybody else at the border. Nobody's coming in," Trump said as he prepared to leave for a political rally in Florida.

The president further indicated his administration was weighing following through on prior threats to end foreign aid to the countries of origin of refugees traveling in the caravan. The present group of migrants, which number several thousand, are currently in southern Mexico traveling northward but also hail from Honduras, El Salvador and Guatemala.

Earlier this week, the Pentagon announced that 5,200 US troops were being sent to the US states that border Mexico in anticipation of the caravan's arrival next month. It's presently unclear whether the last announcement represents an additional 15,000 troops or if it includes the 5,200 already announced.

Trump tweeted earlier Wednesday that there were "many more troops coming" to the US-Mexico border, which he called "sacred."

​The present border was finalized in 1854, following the 1848 Mexican-American War, when the US seized roughly one-third of Mexico's territory. The Gadsden Purchase followed in 1854, in which the US bought unceded parts of modern Arizona and New Mexico from Mexico.

Trump further justified his position by representing the caravan of refugees as being effectively an army set on invading the US, claiming they had "fought back hard" against Mexican soldiers, who were "unable or unwilling to stop" the caravan.

​In addition to the deployment of soldiers, Axios leaked footage from an interview with Trump on Monday in which the president announced his intent to eliminate birthright citizenship, a constitutional principle by which all persons born on US soil automatically receive US citizenship. Trump later indicated he believed birthright was a motivating factor for migrants coming to the US.