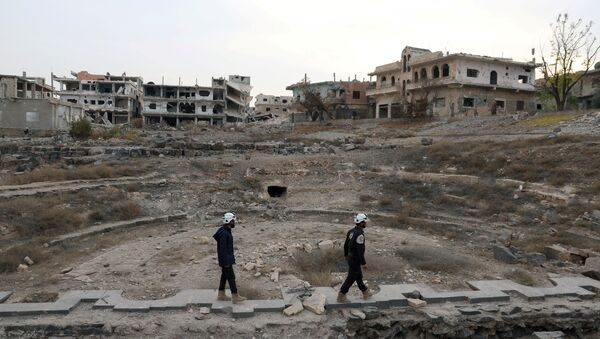 Sputnik: What is behind the resettling of the White Helmets by the Western nations and Canada in particular?

It's only a theory, but I think what's behind Canada and other countries intervening and bringing the White Helmets out of Syria is that they've garnered a lot of public goodwill the White Helmets documentary, and they're going to use the White Helmets in other conflicts around the world because they've already got this public image of being humanitarian rescuers, and so they don't have to re-create the whole concept of humanitarian rescuers working in terrorist-controlled areas and other imperialist wars that the US, the UK and others choose to participate in in the future.

Sputnik: There is definitely some controversy surrounding the White Helmets and what exactly it is that they do. Do you think that there's a risk to Canada? There have been some accusations, I don't know to what extent they have been proven, that there is an Al-Qaeda affiliation or other terrorist groups are affiliated with the White Helmets. What are your thoughts about the danger that can be posed by resettling the White Helmets in Western countries?

Sputnik: Actually the United States has also stopped funding to the White Helmets, of course, at the same time Heather Nauert praised them as brave men and women, but Donald Trump has cut funding…

Christopher Oldcorn: Yes, but I think it's been more of cutting funding publicly and there're just putting it into like the CIA, for example, where they don't have to say where the money is going. The White Helmets on the ground are working almost hand-in-hand with American troops, who are supplying them with weapons and so on.

Sputnik: You are an investigative journalist and you're speaking out against the White Helmets, on what grounds? what information do you have or what you have personally uncovered though your investigations regarding the nature of the activities of the White Helmets and their affiliations?

Christopher Oldcorn: It's just a lot of questionable things. For example, some of the filming that was supposedly done by the White Helmets was actually done in Malta. There's been numerous situations where there's pictures of them literally at an execution where someone's being beheaded and the White Helmets are right there, they pick the person up, but why aren't they trying to stop the person from being beheaded instead of just watching it happen and then picking up the body and taking it away.

There's just so many different things that happened with the White Helmets that just don't make sense if you're a humanitarian group trying to rescue people. Plus if you watch any of their videos it's always kids and anyone who's taken a basic first aid course knows that the way that they're taking people out of buildings and looking for them and so on is not the way you do it; they don't even know how to carry baby correctly, never mind actually do first aid and CPR, and all the other things that you would normally expect a paramedic-type organization to be doing.