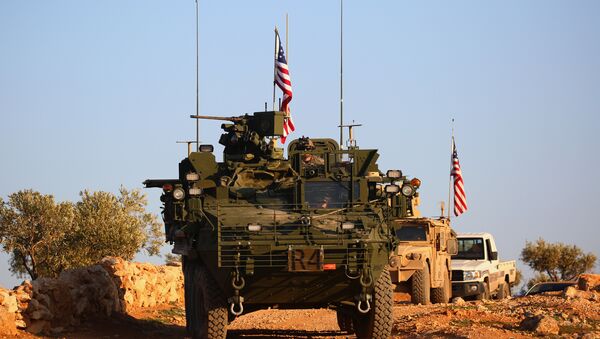 In early June, Ankara and Washington adopted a road map envisaging the Kurdish forces' withdrawal from Manbij and the transfer of control over the Syrian city to Turkish and US troops. Kurdish units liberated Manbij from Daesh* in 2016.

Turkish and US troops are due to start conducting joint patrols in the Syrian city of Manbij later on Tuesday or Wednesday, Turkey's Defense Minister Hulusi Akar was quoted by Anadolu news agency as saying on Tuesday.

"We have wrapped up training for US-Turkish patrols in Manbij and will start to carry out such patrols today or tomorrow. After Manbij, our next venue will be east of the Euphrates," Akar pointed out.

The forces of Turkey and the US-led coalition have been carrying out independent patrols in Manbij since June 18.

Earlier that month, the two countries approved a stabilization road map on Manbij which stipulated the exit of Kurdish People's Protection Units (YPG) from the city and that control be handed over to Turkish and US troops.

Turkey, US Agreed Roadmap of YPG's Withdrawal From Syria's Manbij
The Turkish government has long been seeking the YPG withdrawal from Manbij over security concerns, as it regards the YPG as an affiliate of the Kurdistan Workers' Party (PKK), blacklisted by Ankara as a terrorist organization.

Earlier this year, the Turkish military conducted an offensive against the Kurdish militia in Syria's northern border region of Afrin.

Syrian authorities have, for their part, repeatedly opposed the presence of US and Turkish forces in Manbij, with the Syrian Foreign Ministry describing the situation in Manbij as "a violation of UN resolutions."