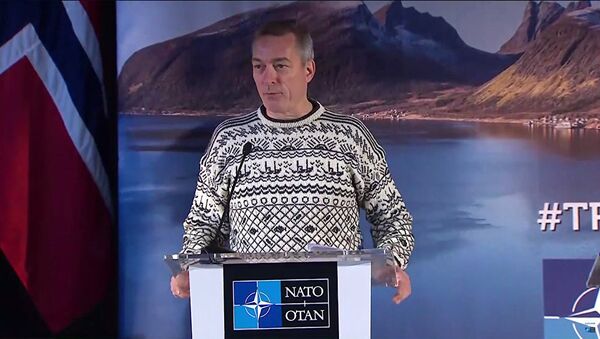 NATO kicked off Trident Juncture-18, the alliance's largest drills in recent history, in and around Norway and Iceland last week. 31 countries, 50,000 troops, 10,000 military vehicles, 140 combat aircraft and 70 ships including a US carrier group are involved in the drills, which simulate an alliance response to an attack 'from the north'.

Stressing the "great importance" of being a "responsible and credible ally," as well as Norway's investment in Transatlantic security, Bakke-Jensen called the Trident Juncture drills "a great opportunity for Norway to train and exercise our ability," and "to receive and handle a large number of troops and equipment from abroad."

Asked about a so-called Russian military buildup in the Arctic Ocean area, the defense minister stressed that Norway was "putting more effort in situational awareness" and promised that Norway "will be present with Norwegian planes, ships, and Norwegian troops, because this is our home guard too. So, we're exercising, we're moving our land forces up north, back to Finnmark. This is to create the understanding of the situation, we need to avoid misunderstandings."

Four US Soldiers Injured in Vehicle Pile-up in Norway Ahead of NATO Exercise
Stoltenberg, for his part, noted that while NATO was looking to cooperate with Russia to keep tensions low "in the High North," it was also "strengthening" its presence in the region "because of what we see from the Russian side, especially the need to also protect the sea lines of communications in the North Atlantic."

"It would have been better if it were reindeer, of course," one user joked. "It looks like he just came back from fishing, stopping by for a minute," another wrote. "The clothing matches the exercises," another argued. "This is treason! Where are the Norwegian deer?!" another demanded.

A few users found a more serious meaning in the sweater. "The guy's dressed like he would at home, informally. This means he's not afraid and knows that he and his country is not threatened by Russia," one commentator suggested.