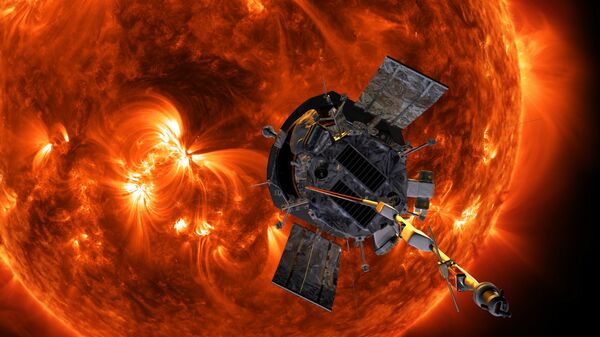 © NASA . Johns Hopkins APL/Steve Gribben
Subscribe
International
India
Africa
Harder, better, faster, stronger (and closer) - NASA's historic Parker mission is on a record-smashing spree and has no plans to stop yet. The spacecraft, which was launched in August with an ambitious goal to "touch the Sun" - not literally, though, - is designed to re-think our understanding of the Sun's corona and solar winds.

The Parker Solar Probe, humanity's first-ever mission into the Sun's outer atmosphere, or corona, has become the closest human-made object to ever approach our star.

The space agency said in a statement on Monday that Parker passed the current record of 26.55 million miles (42.73 million km) from the Sun's surface. Yet, the spacecraft is gradually shrinking its orbit around the sun, with the final objective being 3.83 million miles (6.16 million km) from the surface. The previous record was set by the German-American Helios 2 probe in April 1976.

"It's been just 78 days since Parker Solar Probe launched, and we've now come closer to our star than any other spacecraft in history," said Project Manager Andy Driesman.

It also emerged on Monday that the mission set the speed record for spacecraft traveling relative to the Sun, surpassing 153,454 mph (shy of 247,000 km/h) and breaking the record set by Helios 2 back in 1976.

The Parker Solar Probe blasted off from Cape Canaveral air force station in Florida on August 13.

During its 7-year mission, the probe will complete 24 orbits of the Sun, coming within 3.8 million miles of its surface, and dip into the corona, the plasmic aura that is even hotter than the surface.

The craft will seek to unlock some of mysteries about our Sun's behavior by sampling the corona, the birthplace of solar flares and other violent events, and get a better understanding of how solar winds are formed.

NASA expects to get the first batch of data in December, but the spacecraft has another mission: it holds a memory card with the names of over 1.1 million people who signed up to "travel" to the Sun. The probe is equipped with a carbon heat shield to prevent it from roasting.