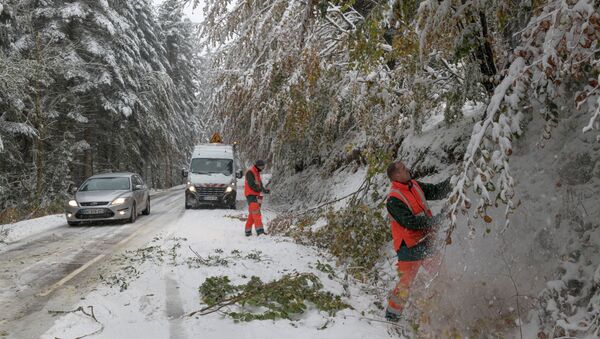 © AFP 2023 / Thierry Zoccolan
Subscribe
International
India
Africa
Around 900 trucks were stranded during the snowfall and several hundred drivers left their cars hoping to find a warmer and safer refuge to wait until morning, Reuters reported.

Auverge-Rhone-Alpes and regions south and west of Lyon were the main areas hit by the unexpected and unseasonal snowstorms.

Around 900 trucks were stranded during the night by the heavy snowfall. In addition, several hundred drivers left their cars hoping to find a warmer and safer refuge to wait until morning.

Traffic has ground to a halt in heavy snowfall in near Saint-Ferréol-D'Auroure in Haute-Loire, France tonight, October 29. Report: Karen Jussouy pic.twitter.com/BxBSPazhlf

Local residents turned to Twitter to share images of uncommonly thick snow for this time of the year.

It’s been looking like this here for the last two days😱☃️❄️I hope it won’t continue! It’s way too early for snow😱😘xx pic.twitter.com/6mYF9t2qyO

Devastation for trees in France. Record snow fall weighing down on trees full of leaves. The view up /down our drive this morning — no electricity. It’s still October pic.twitter.com/idWINQxmGS