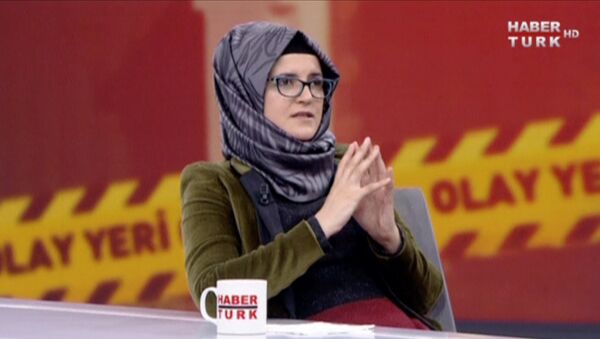 © REUTERS / Courtesy Haberturk
Subscribe
International
India
Africa
LONDON (Sputnik) - Hatice Cengiz, the fiancee of slain Saudi journalist Jamal Khashoggi, has expressed disappointment in the conduct of US President Donald Trump, stating that the US leader should not attempt to instigate a cover up of the circumstances that led to her partner’s death.

"I am deeply grateful for the solidarity of people all over the world. I am however disappointed in the actions of the leadership in many countries. Particularly of US President Trump. President Trump should help reveal the truth and ensure justice be served," Cengiz said at a memorial gathering in London on Monday, stressing that he "should not pave the way for a cover up" of Khashoggi’s murder.

At times visibly distressed, Cengiz all the same spoke for some length on her desire to see those responsible for Khashoggi's death punished, calling on foreign governments and private citizens to take action.

Stating that her fiancee was now "a martyr for the struggle for democracy and freedom in our part of the world," she also demanded the return of his body, claiming that Saudi authorities were aware of its location.

"I believe that the Saudi regime knows where his body is. They should answer my demand [and know] that this is not only the demand of a fiancee, but a human and Islamic demand, from everyone [in] every nation," she stressed.

Cengiz said she wanted justice "to be served" not only for those who murdered Khashoggi but also for those who ordered his killing.

"These questions are not just my questions. They are now being asked by millions," she noted.

Cengiz was joined by a number of other speakers in a memorial event organized by the Middle East Monitor (MEMO) and the Al Sharq Forum, including a Conservative member of UK Parliament, Crispin Blunt.

Although admitting he had not known Khashoggi personally, Blunt described the situation as a "moment of truth" where the United Kingdom should consider promoting human rights within the Gulf Kingdom using "every possible measure to make Jamal's dream for Saudi Arabia a reality."

Blunt also warned of the consequences of a failure to act on the human rights situation within Saudi Arabia, arguing that if the Khashoggi affair was not properly resolved the resulting precedent would be one of "terror" rather than progress.

"Jamal's death is a very profound moment. If the Saudi state does not deliver full account of his murder, the legacy will be one of terror where all Saudis will not be free to even whisper criticism of their leaders even within the family or with the closest of friends," he argued.

Top Saudi Prosecutor to Visit Turkey, Negotiate on Khashoggi Case Investigation
Journalist and long-term critic of the Saudi domestic and foreign policy, Jamal Khashoggi, is believed to have been killed on October 2 soon after entering the Saudi Arabian consulate in Istanbul.

Although Cengiz waited outside for her finance to re-emerge with legal documents that would permit their marriage, Khashoggi failed to appear.

On October 19, Saudi Arabia admitted the journalist had died during a fistfight inside the consulate. Riyadh said 18 people had been arrested over their suspected involvement in the tragic incident.

White House spokeswoman Sarah Huckabee Sanders said at a briefing on Monday that Trump was considering different options in response to the murder of Khashoggi. Trump said on October 19 that if Saudi Arabia was found to be behind Khashoggi’s death, the kingdom would face "very severe" consequences.