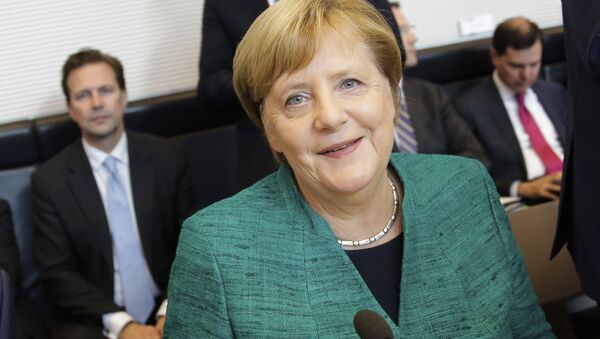 © AP Photo / Markus Schreiber
Subscribe
German Chancellor Angela Merkel's recent decision to resign from the Christian Democratic Party in addition to not seeking another term as chancellor in the 2021 elections are strong indicators that the European country is entering new political grounds, activist and journalist Diani Baretto told Sputnik.

Merkel announced on Monday that after 18 years, she would be stepping down as the leader of the Christian Democrats in December. The 64-year-old Hamburg native also indicated that she will not contest for any political position in the future and would not run for office should a snap election be held prior to the 2021 election.

She will, however, be finishing out her fourth, and final, term as German chancellor.

"Today it is time to begin a new chapter," Merkel said, speaking at the Berlin headquarters of the Christian Democratic Union. Her decision to part ways with German politics was made prior to the parliament's summer recess.

​Baretto told Sputnik Radio's Loud & Clear on Monday that Merkel's departure is signalling "the end of an era."

"It was quite an upheaval, but I think this is the endgame for Merkel, and they're finally paying attention," Baretto told host Brian Becker, recalling the disastrous outcomes in recent regional elections in Hesse and Bavaria for Merkel's party and sister party, the Christian Social Union.

"European politicians are sad to see her go because she's seen as this element of stability, but the German populace… don't feel like they're being included in fairness of equality of chances to improve their stations in life," she added.

"It doesn't come as a surprise."

The Green Party and the Free Democrats both made gains, however, finishing with 19.5 percent and 7.5 percent of the vote, respectively. And, for the first time ever, the far-right Alternative für Deutschland (AfD) will be making its way to the regional assembly after scoring 12 percent of the votes.

Merkel and her party have faced growing backlash from Germany's far-right over topics such as migration and, of course, policies that allowed hundreds of thousands of refugees to relocate within the country.

Though unsure if the German parliament will turn far-right, Baretto suggested that anything is up for grabs at this point in time. "[Voters] are unhappy," she stressed.