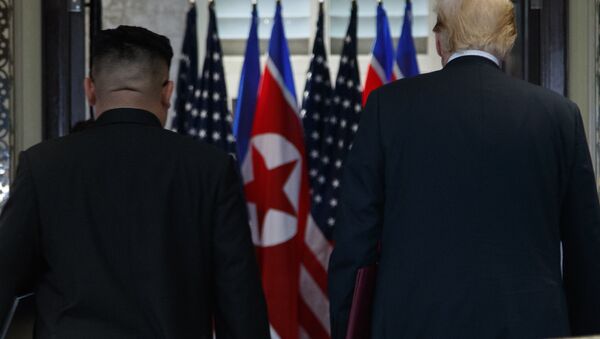 TOKYO (Sputnik) – US Department of State’s Special Representative for North Korea asked on Monday the South Korean government for assistance in organization of a new top-level summit between US President and North Korean leader, the South Korean presidential press service said in a statement.

"Mr. Im called … for successful talks between the United States and North Korea. Mr. Biegun asked the South Korean government for assistance [in the summit’s organization]," Stephen Biegun said during his meeting with Presidential Chief of Staff Im Jong-seok.

READ MORE: Nuclear Weapons Could Be Prohibited in 2019, Campaigners Say

During the talks, Im and Biegun also pointed out the importance of the Washington-Seoul cooperation on the North Korean issue.

North Korea's Talks With US, S Korea Led to Peace on Peninsula - Workers' Party
On October 7, US Secretary of State Mike Pompeo visited North Korea where he met Kim and discussed the organization of the second top-level US-North Korean summit. According to the Asahi newspaper, the summit could be held in mid-November in Europe.

The situation on the Korean Peninsula has significantly improved since the beginning of this year, with the North Korean leader and South Korean President Moon Jae-in having held several meetings. In June, Kim also reached an agreement with Trump, stipulating that North Korea would make efforts to promote complete denuclearization of the peninsula in exchange for US-South Korean military drills' freeze and a potential removal of US sanctions.