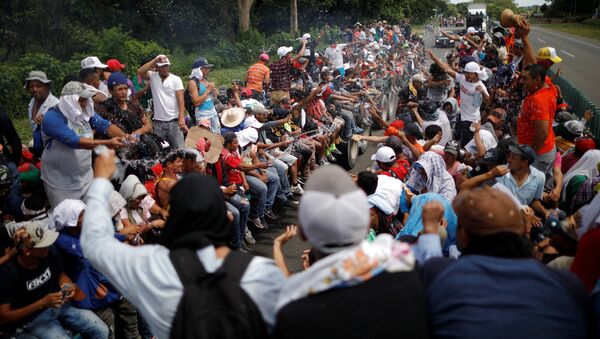 Ekaterina Blinova
All materialsWrite to the author
American voters know well the difference between vetted and unvetted migration and are likely to support Donald Trump's stance towards the massive caravan flowing from Latin America, Wall Street analyst Charles Ortel told Sputnik, sharing his vision on who could be behind the movement.

"Like the orchestrated Kavanaugh circus, the caravan caper will likely backfire at the ballot box," Wall Street analyst and investigative journalist Charles Ortel told Sputnik. "Shrill voices of globalist scolds are calls to action for the less silent majority that treasures America and reveres our Constitution."

Ortel's comment comes amid growing crisis on the American southern border: A massive migrant caravan with over 7,500 people is heading from Honduras to the US.

Speaking to Fox News on October 27, US Vice President Mike Pence said that "the caravan was organized by leftist organizations, political activists within Honduras, and he said it was being funded by outside groups, and even from Venezuela," citing the president of Honduras, Juan Orlando Hernández.

Meanwhile, the Pentagon is deploying concrete barriers to the border and is reportedly due to dispatch thousands of US troops in the area to prevent what Donald Trump has recently called "an invasion of" the United States.

"Despite decades of aid and trade, many nations to the south of America remain mired in misery often run by corrupt governments that keep a small minority happy (and wealthy) while exploiting the poor and vulnerable masses. So, it is only natural that some persons make desperate choices — including fleeing north in hope of relocating to our nation," Ortel said, commenting on the situation.

Caravan Migrants Beat Up Food Disperser Over Rumor of Child Stealing
He bemoaned the fact that children usually fall prey to social disruption: "Human trafficking remains too commonplace so the presence of unaccompanied minors, and minors who may or may not be truly related to adult travel companions poses vexing issues," he added.

The analyst pointed out that additional threats are posed by radical elements.

That said he stressed that "above all, America's federal government must protect the interests of America's citizens."

"We welcome immigrants who comply with laws pertaining to seeking residence and then allegiance to our Constitution and laws," Ortel said. "On the other hand, 'open-borders globalists' can be moved to exploit dangerous realities (massive inequality between incomes of our poorest citizens compared to those earned in nations to our south) to suggest that the Trump Administration and Republicans are callous for wishing to tread carefully in evaluating potential immigrants."

Clinton Foundation Went for 'Biggest Fraud Ever Investigated' - Analyst
According to Ortel, the launch of the caravan movement ahead of the November midterms "is not accidental." He believes that "we may soon find proof that left-leaning American political interests have been involved instigating these crises and fanning attention in corporate and social media."

Earlier, on October 23, the Daily Caller's Raheem Kassam presumed that the migrant caravan action could be linked to Democrat donors, US government bureaucrats.

Referring to Kassam's report, the Wall Street analyst suggested that "the most likely conduits for cash needed to finance the caravans are 'charities'."

"American charities that manage also to comply with the local laws of Honduras, Guatemala, Mexico and other southern nations surely should risk losing their US tax-exempt status once the Internal Revenue Service (IRS) and Department of Justice discern they may actually be increasing the cost and burden of administering immigration protocols," he noted.

For its part, Judicial Watch (JW), a conservative activist group, found out that "besides gang members and mobs of young angry men, the Central American caravan making its way into the United States also consists of Africans, Bangladeshis, Sri Lankans and Indians."

On October 2, JW president Tom Fitton, tweeted that President Trump needed "to order a criminal investigation of how the 'caravans' have been organized and financed." Citing findings of a JW group on the ground in Guatemala he said that "it is likely [that] Americans [are] involved" in the caravan case.

URGENT: @RealDonaldTrump should order criminal investigation of how the "caravans" have been organized and financed. Based on our @JudicialWatch team's reporting from Guatemala, it is likely Americans involved. Details on crisis here: https://t.co/f00NgBvihv

"Tom Fitton and Judicial Watch do excellent work — I listen carefully to all of their comments and hope Attorney General Sessions and the new head of the IRS — Charles P. Rettig — are also listening carefully," Ortel remarked.

The Wall Street analyst underscored the difference between vetted and "unvetted" immigrants, stressing that "unvetted potentially criminal elements pose grave dangers." In contrast, "vetted immigrants make far-reaching contributions to America and to other nations," he highlighted.

"Political operatives who may be exploiting vulnerable persons to drive an anti-Trump narrative leading up to the 2018 elections are likely to find, yet again, that their stunts will backfire on November 6, 2018," he predicted. "Most Americans cherish jobs, and shun mobs, a fact that seemingly protected elites in Universities, globalist corporations, and gerry-mandered political offices fail to appreciate."