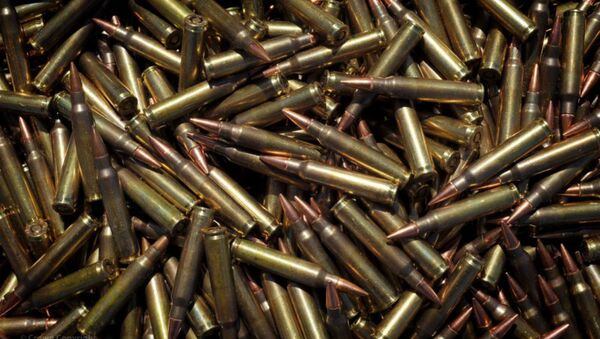 The haul of weapons is the latest in a long series of discoveries of US, European and Israeli arms, munitions and supplies across Syria in recent months as the Syrian military has restored control over areas previously controlled by a ragtag collection of jihadist terrorists and other armed militants.

The Syrian Arab News Agency has released fresh photos of weapons and equipment left behind by terrorists in villages in the province of Quneitra on the Syrian-Israeli border in the Golan Heights.

The large stock of arms, ammunition, vehicles, equipment and medicines, including US and Israeli-made equipment, was reportedly gathered from the Quneitra province villages of Briqua, Beir Ajam and Rasm al-Sanad, and found thanks to cooperation between authorities, reconciliation committees and local residents.

Syrian forces found large quantities of weapons, ammunition and some vehicles in the villages of Al-Bariqah, Bir Ajam and other places alongside the border line with the occupied Syrian Golan. #Quneitra pic.twitter.com/tFFoY3hEaD

Sana News,The #Syrian army discovered Large amounts of weapons and Medicine including #US and #Israeli made weapons,left behind by terrorists in the villages of #Quneitra which were liberated from terrorism,also Western Made Ambulances were found #Syria. pic.twitter.com/RRBOZWB66M

Syrian army found large quantities of weapons, including Israeli and American weapons, medicines and Western-made cars in the villages of Brega,Ajam and Sanad in #Quneitra countryside. pic.twitter.com/I5v8v7Fv0g

Syrian forces regained control over the provinces of Daraa, Quneitra and Suwayda this past summer, thanks in large part to the Russian Reconciliation Center's diplomatic efforts to persuade militants to put down their arms and either relocate to the militant-held province of Idlib or join the fight against Daesh* and other terrorist groups. Last week, the Syrian military ramped up its operations to mop up Daesh remnants in Suwayda, with the terrorists reported to be surrounded and cut off from freshwater resources.