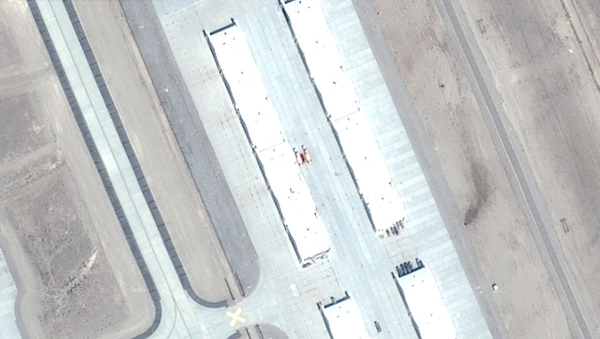 © Yandex Maps
Subscribe
Suspicions about the contents of a hangar at the Tonopah Test Range Airport in central Nevada only grew stronger after Google Maps inexplicably decided to blur the image in question.

The Drive military observer Tyler Rogoway has posted an unusual image of a blurred giant flying-wing shaped aircraft seemingly too large to be a RQ-170 Sentinel drone sticking out of one of the test range's hangers, speculating that it may in fact be a 'Super Sentinel' design capable of carrying out both strike and electronic attack missions.

The observer based his hypothesis on the fact that while the air platform in the photo appears to have a wingspan of nearly 80 feet, hardly allowing it to cover up inside past the hanger's 90 feet wide doors, the similarly secretive RQ-170 is believed to have a wingspan of just over 65 and a half feet.

It's also notable that the photo, dated October 1, 2017 and taken by DigitalGlobe for Google, seems to have been digitally edited to blur one or more of its components.

Alleged Iranian Drone Captured By Israel is ‘Copy’ of US’ Sentinel UAV
In any case, Rogoway stressed that the appearance of the mystery craft in the satellite image in the first place was an indication that base personnel were unable to conceal it in time despite being perfectly aware of the orbital paths of imaging satellites which regularly pass overhead.

A few sharp-eyed Twitter users questioned Rogoway's conclusions, suggesting that the image in question looked more like a mockup of a Boeing MQ-25 Stingray aerial refueling drone, currently being developed for the US Navy. Others argued that the half-hidden craft may actually be an RQ-180, a stealth surveillance UAV created by Northrop Grumman for the US Air Force.

The Tonopah Test Range Airport is known as a hive of secretive US military activity, housing rarely seen aircraft and equipment, including the RQ-170 and the F-117 stealth bomber, and carrying out tests of nuclear-capable gravity bombs from time to time. The base is also thought to have hosted Soviet and Russian fighter aircraft, missile systems and air defense equipment, including the Scud-B, S-300, and even the Pantsir-S which the US has obtained from its European and Gulf allies.

000000
Popular comments
Some new killing machine. Instead, they could make a machine to feed people or to inhabit oceans and deserts. But, no, they just want to kill, and to make robots. Humans are "outdated".