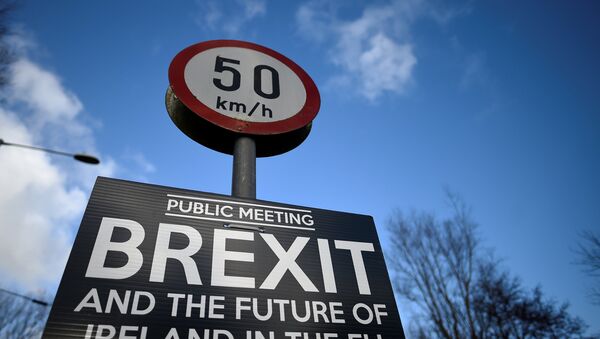 Michael D Higgins has been re-elected as the president of the Republic of Ireland with 56 percent of the vote. Sputnik talked about elections in Ireland with Dr. Eoin O'Malley, an Associate Professor in political science at Dublin City University's School of Law and Government.

Sputnik: What does Michael Higgins' re-election mean for the future of Ireland?

Dr. Eoin O'Malley: Not a huge amount, the presidency of Ireland isn't a terribly important role. It's mainly a ceremonial role, so he was comfortably re-elected because he's quite a popular figure, but in terms of real politics it's not an important role. So you might kind of think a socialist being elected might say something about Ireland but it, probably, doesn't say a huge amount because he was just a very popular guy and he'll run for the next seven years but it doesn't have a huge impact on Irish politics.

Sputnik: Does it at all act as a bit like a litmus test to understand the mood of the electorate at all?

UK Chancellor Hammond Unveils Fiscal Stimulus to Offset Brexit Risks
Dr. Eoin O'Malley: One of the other candidates called Peter Casey who got 20%; he had made comments during the election campaign which were anti-travellers, Irish travellers are a minority group a little akin to gypsies and he made comments against them and he went from 2% to 20% in the course of a week.

READ MORE: Main Candidates in Ireland's 2018 Presidential Election: All You Need to Know

Sputnik: Northern Ireland predominately voted against Brexit, what is the political mood right now, and what do the elections in the Republic of Ireland mean for Brexit negotiations and the issue of the hard border in Ireland?

I mean the Irish government doesn't have a direct impact or a direct say in Brexit negotiations, it's mainly the British government that can influence that, so this election says almost nothing about Brexit negotiations, but it will continue to be the case that Ireland's up against a harder border. Now the border between (the Republic of) Ireland and Northern Ireland is one that you will pass and you wouldn't know that it exists.

So there is a legitimate fear that a hard Brexit will lead to a hard border but these elections won't have an impact, what will have an impact is probably the political parties in Northern Ireland, in particular, the Democratic Unionist Party in Northern Ireland has some influence over the British government and it seems to be in favor of a policy that partly will lead to a hard border, even though it doesn't seem to be in anybody's interest.

Sputnik: What is the overall status of this issue? People in Ireland are they quite concerned about the issue of this hard border versus the soft border and where do sympathies lie?

Violence in Northern Ireland Possible if Brexit Talks Go Wrong - Irish PM
Dr. Eoin O'Malley: People are very concerned about it because at the moment it's almost a non-existent border, so most people on both sides of the border are opposed to any form of hard border, partly because there's a fear that it will lead to a resumption of violence.

Because if you have this hard border, people who want Irish unity might use it as a target, might use the harder border as a target for terrorist violence.

Nobody on the British side or the Irish side wants a hard border, but it's increasingly looking like it's difficult to avoid one, because if you have Britain outside the European Union and especially the Customs Union then you have to in some way check what's going on over the border.

At the moment you drive over the border and you don't know that it exists; you see a lot of people who live on one side of the border and work on the other side of the border, it's quite common to do that, and so it would be a disaster if you actually have to go back to checking the [trunks] of people's cars to see if they're smuggling TVs over and things like that, because there's no longer a customs union between the two places.

Sputnik: The people decided to remove the crime of blasphemy from the Constitution; is that a significant decision? And what does that really say about the dynamics of the role of the Catholic Church in Irish society?

Dr. Eoin O'Malley: It probably wasn't the most significant decision, it has been in place that there is a crime of blasphemy for the last 80 or so years, but nobody has ever been convicted, and so it probably doesn't mean a huge amount.

Sputnik: Have they ever been tried for it or arrested?

Brexit, Trade War, Oil Prices: Not Good News for the Global Economy - Scholar
Dr. Eoin O'Malley: No, there have been attempts by people in an organization called Atheist Ireland to try to get convicted of it and they tried their best to break the law but the way the law was written it was almost impossible to get convicted.

Of course it still does have some influence in that it controls a lot of hospitals and schools, but I think this indicates to some extent that people want to move away from the Catholic Church having any role within Irish society.