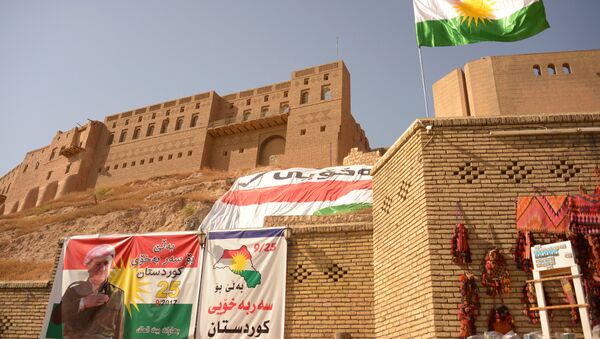 © Sputnik / Dmitriy Vinogradov
/
Go to the mediabank
Subscribe
International
India
Africa
MOSCOW (Sputnik) - The autonomous Kurdistan Region will start a serious dialogue with Baghdad to resolve all differences between both sides once the new Iraqi government is fully formed and begins working, Hoshyar Siwaily, the head of the Kurdistan Democratic Party's (KDP) foreign relations office, told Sputnik on Monday.

According to the KDP representative, the Kurds have supported Abdul-Mahdi’s nomination and would be monitoring his stance on the Iraqi Kurdistan issue.

"We have supported him and we will be supporting him, we will be monitoring his performance, achievements, especially where relations between Baghdad and Erbil are concerned. We hope the new prime minister who is a good politician, who is a friend of the Kurds, will be able to learn from the mistakes of the past, especially the mistakes the previous prime minister committed against the Kurdistan Region. We are positive," he added.

Patriotic Union of Kurdistan Nominates Salih for Iraqi Presidency
Additionally, there is "a continuous dialogue and telephone talks" between the Iraqi Kurdistan leadership and Abdul-Mahdi, Siwaily said.

On October 3, newly elected Iraqi President Barham Salih, a Kurdish politician, named Shiite Adil Abdul-Mahdi, who was Iraq's oil minister between 2014 and 2016, as the country's prime minister and tasked him with forming a new government. Abdul-Mahdi was sworn in on Thursday, as well as 14 out of 22 ministers he had designated.

Siwaily also said that the two sides intend to discuss articles in the constitution that concern the oil and gas industry, as the federal government of Iraq and autonomous Iraqi Kurdistan region are ready to sit down for talks to settle the dispute over control of the country's oil and gas reserves.

"Both sides are ready for talks and have the intention to resolve all the issues, including the oil and gas issue, the revenue issue which we have with Baghdad, so we are optimistic," Siwaily said.

The official added that "oil and gas is one of the crucial issues between Erbil and Baghdad. We have to sit down and resolve these issues according to our constitution. Some of the articles in the constitution specifically talk about oil and gas issue. So hopefully there will be a room."

Gunmen Kill 2 Iranian Border Guards Near Frontier With Iraqi Kurdistan - Reports
Until recently, the oil-rich province of Kirkuk was under the control of the Iraqi Kurds. However after the Kurds held an independence referendum in September 2017, Baghdad launched an offensive and regained control over Kirkuk in the following month. Soon after that Baghdad reported that it would establish a special committee aimed at developing oil production in the region and would create a group of experts together with BP to analyze the situation in Kirkuk.

Relations between Baghdad and Erbil escalated after Iraqi Kurdistan held an independence referendum in September 2017, which was later deemed illegal by the Iraqi federal government.

In response to Erbil's decision to secede, Baghdad launched a military operation and took control over the Kurdish oil-rich province of Kirkuk, as well as imposed sanctions, restricted banking operations, closed border crossings and banned international flights to and from the region. The restrictive measures were lifted in January after Kurdish government authorities and private institutions accepted the authority of the federal government of Iraq. The Iraqi Kurdistan has not yet announced if it planned to hold another independence referendum in the future.

The head of the KDP's foreign relations office also stressed that Iraqi Kurdistan supports the Syrian Kurds' self-determination efforts and hopes they will be able to protect their territorial gains through peaceful means, such as a dialogue between all the parties involved in the Syrian conflict.

"As far as Kurdistan is concerned, we support ambitions of all Kurds for self-determination, including the Kurdistan in Syria and other parts of Kurdistan. What we are calling for is to resolve all the issues with respective governments in a peaceful way, to enter a serious dialogue to avoid bloodshed and fighting, as much as they can, of course. In Kurdistani Syria we understand the situation; we hope that they will be able to protect the gains they have met so far [against the IS] and for the better service of our brothers and sisters in Syrian Kurdistan," Siwaily told Sputnik.

The KDP official also expressed hope that all parties involved in the Syrian conflict would better coordinate their actions in the region.

"Nothing is impossible in politics, so we have to be hopeful and that these relations will be better in the interest of all the parties involved in this conflict," he added.

US to Build World's Largest Consulate Facility in Iraqi Kurdistan - Reports
Syrian Kurds, namely the US-backed Syrian Democratic Forces (SDF) and Kurdish People's Protection Units (YPG), have been fighting the Daesh terror group* in northeastern Syria, actions which have been criticized by Damascus.

On Sunday, Turkish forces bombarded positions of YPG militia, outlawed by Ankara as a terrorist organization, on the eastern shore of the Euphrates River in northern Syria. This followed the October 17 incident involving two US-led coalition F-15 fighter jets carrying out an airstrike on an allied Kurdish unit in Syria as a result of poor coordination. The latter incident killed six fighters and injured another 15.