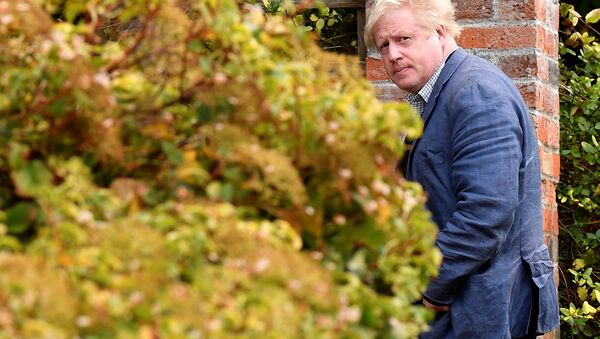 Boris Johnson has called for government's Chequers agreement to be chucked — an appeal he has made on numerous occasions, slamming it as the deal that will lead Britain to "lose control."

Boris Johnson discussed one of famed British manufacturers in his weekly column, praising Dyson and its innovative products, including electric cars.

He slammed the government for not being able to convince Dyson to stay and manufacture their electric cars in the UK. He reasoned the Singapore government — where Dyson has decided to build its first electric cars — has made a bigger effort.

.@BorisJohnson: No wonder Dyson's off to Singapore — Britain is currently doomed to humiliation https://t.co/TRgfqBLTxR

Johnson's interest, however, lied in the type and size of custom fees a Brit would have to pay for the car when it is eventually imported from Singapore to Britain.

"Come 2021, it is plain that Britain will still be locked in the EU customs union, and still with no plan for exit. Do you know what that means? That the tariff on that car coming into the UK — currently 10 per cent — will still be set by the EU; and 80 per cent of that tariff will still be going to Brussels. How is that consistent with taking back control of our borders, or our money, or our laws, or an independent trade policy, or coming out of the customs union? It is not," Johnson argued.

Dyson electric car will be built in Singapore in 2021 https://t.co/ACj908HokU#EV pic.twitter.com/DtesAXGOjM

His prognosis for British consumers interested in purchasing Dyson EV is grim. Johnson said there was nothing stopping the EU from humiliating UK customers by "forcing them to pay more for a product in the UK domestic market" and sending "that tax to Brussels."

"That isn't taking back control. It is losing control. It is an absolute humiliation, and it is quite incredible that the world's fifth biggest economy is willing to sign up for it," the former FM said.

The UK government continues its negotiations with the European Union on a Brexit deal that is expected to see the question of UK's membership of the EU customs union and single market solved prior to the March 2019 deadline.

According to the PM Theresa May's most recent statement, "95% of the withdrawal agreement and its protocols" had been now settled with the EU leaders. One of the contentious issues in the talks was the conditions of the Brexit "transitional period" extension.

If it at the end of 2020, the UK-EU future relationship was not ready, the proposal, according to May, is that the UK would be able to make a sovereign choice between the UK-wide customs backstop or a short extension of the implementation period.

Mr. Johnson however argued that the PM's plan means nothing but relinquishing the control and stifling British business innovation.

"It is well known that ever since Dyson came up with his bagless vacuum cleaner he has been the object of jealous plotting by other European manufacturers, especially the powerful German companies that are so influential in setting standards. As electric vehicles gain an ever bigger share of the market, there is ample scope for the Commission to start flexing its muscles," he argued.

In preparation for Brexit, Berlin has been reported to let small businesses that had initially registered as British companies to convert to German companies after March 29, 2019. Under the new legislation, these corporations would reportedly be able to become German businesses. And if under current regulations, a limited liability company in Germany is required to have capital stock of over $28,000 (25,000 euros), the new law would not require any more capital when the firms change to register as German companies.

At the same time, many of British car manufacturers have said they won't be relocating from the UK, despite Brexit, while others warned against possible negative impact of leaving the EU but haven't announced relocation plans either.