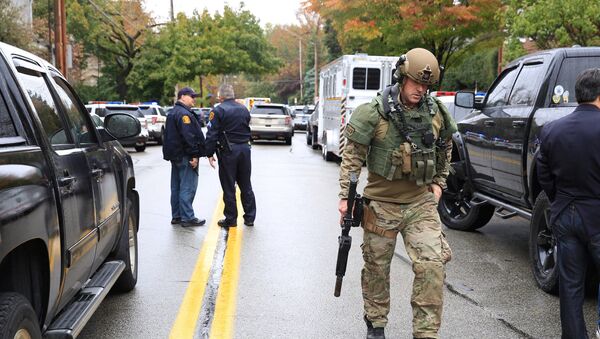 © REUTERS / John Altdorfer
Subscribe
US Federal Prosecutors have filed hate crime charges against Robert Bowers, the Pennsylvania man who stormed a Pittsburgh synagogue on Saturday, opening fire and killing 11 people, in the “deadliest attack on the Jewish community in the US’ history,” according to Jonathan Greenblatt, the head of the Anti-Defamation League.

Cnaan Liphshiz, a Europe correspondent for the Jewish Telegraphic Agency, has given his take on the issue in an interview with Sputnik.

Sputnik: It’s known that this person previously published a lot of anti-Semitic material on his social media sites. What are your thoughts on what could have been done to possibly prevent this tragedy from happening?

Cnaan Liphshiz: Well, I’m calling you from Amsterdam, and for JTA I cover Western Europe, and also Eastern Europe. Unlike in the East, here in the West we have synagogues under constant protection of machine gun-toting army soldiers, police officers, several circles of defense around any prominent Jewish institution; meaning police officers on the outside, and on the inside you have a whole system of security provided by volunteers and guards.  In the United States, there’s none of that. Basically, you have a concierge that you greet on your way into the synagogue, many synagogues. And that’s it — you are inside.

So, obviously, this makes it much more difficult, the European, the Western European model, to carry out any such attack, and there are already voices saying that it would be a belated move to Europeanize the security systems of the Jewish communities of the US in light of what happened. I’m talking about incidents like the DC Holocaust Museum shooting in 2009.

The writing has been on the wall that there is growing willingness to commit anti-Semitic violence in the US, and it appears to many observers right now that change is inevitable, in terms of security systems.

Sputnik: This person was spreading anti-Semitic views on Twitter and other networks, and he wasn’t banned. Do you think that that contributed to this incident? Do you find it strange that he wasn’t on the radar?

Cnaan Liphshiz: Obviously, the US has a much more liberal freedom of speech policy than here in Europe; both sides of the continent, I mean East and West. Hate crime, because of our shared legacy, is much less tolerated than in the US and, to some degree, in the UK.

It’s true that more monitoring, less individual freedoms of speech could have helped, maybe, prevent this and other tragedies, but you are seeing a conflict of one of the ethoses, the main pillars of the American spirit – freedom and the need to ensure religious freedoms. That is a very internal American question that has to be resolved somehow and I think we are nowhere near settling it.

Cnaan Liphshiz: Some people are blaming the way that US President Donald Trump has been speaking about foreigners. I’m not sure that’s accurate. I think it’s too early to say whether that is the root cause of this. Under Obama, there was the Charleston shooting and people accused him of stoking racial tensions. I think the dust needs to settle.

There are claims that the shooter, Robert Bowers, inveighed against Trump; and then he had posts favoring Trump. So, right now it’s not so clear where the blame lies, and what can be done to nip this in the bud, whether it’s more scrutiny over social networks and it’s better flagging anyone who says something vague like “I’m going in,” which Bowers said right before he went in with an automatic rifle.

[…] In terms of handling the symptom, there’s going to be a massive change in how Jewish institutions operate in the US. It’s not going to happen overnight, because you have to realize the scale of the infrastructure of the US Jewry. We are talking about hundreds of synagogues and Jewish libraries. Even if they want to Europeanize now the standards, it would take years before that happens.

The double solution of cracking down on hate speech and reinforcing security around possible targets is the way that the French government has gone about it, and they’ve had considerable success: hate crime, violence have been reduced by half since 2006 in France; so it seems that the symptoms of this disease can be treated.

Views and opinions expressed in this article are those of Cnaan Liphshiz and do not necessarily reflect Sputnik's position.