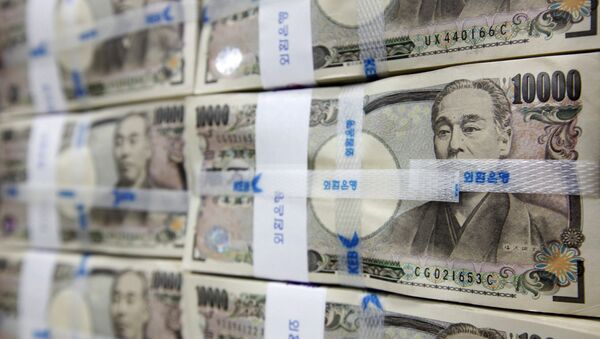 Kristian Rouz – China and Japan have reaffirmed their commitment to deepening bilateral economic and financial ties at an economic forum in Beijing, reaching several potentially far-reaching deals and trade and investment. Economists say the results of this forum could produce longer-term positive consequences for the entire region.

Top Chinese officials and members of the Japanese delegation reached a $28.80-billion currency swap deal during the bilateral forum last week. Additional agreements include a revival in ties on ocean preservation, fishing, as well as industrial and technology cooperation.

"China is willing to work together with Japan to take Sino-Japanese relations back to a normal track, maintaining stable, sustainable and healthy development and making new progress," Chinese Premier Li Keqiang said.

The currency swap deal is seen as one of the most important results of the summit. The deal took effect immediately on Friday and will be intact until October 25, 2021, with a possible extension. The swaps will take place between the Bank of Japan (BOJ) and the People's Bank of China (PBOC) on a regular basis.

"With the strengthening of economic and financial linkages between Japan and China, Japanese financial institutions have been expanding their renminbi-based businesses," the BOJ said.

The agreement is seen as advancing regional trade by increasing the share of regional currencies in multilateral trade and investment. Up to this point, the lion's share of trade in the Far East has been based on the US dollar, rendering the flows of goods and capital exposed to the dollar-yen and dollar-renminbi fluctuations, Federal Reserve policies, and global currency markets.

However, the new agreement could potentially reduce the risks of competitive devaluations by both China and Japan. The deal is also deemed as helping China increase its presence in global currency reserves due to the yen's safe-haven and reserve currency status.

Additionally, many Japanese manufacturers are eyeing new revenues, as they seek to open their manufacturing facilities in China. Beijing has plenty of inexpensive workforce and looser environmental regulations, while the buoyant expansion in Japan's manufacturing is becoming harder to maintain with exclusively domestic resources.

"The Japanese government and companies invested and worked with the Chinese people toward modernization," Abe said. "Seeing how China has developed is a source of pride for Japan as well."

Despite the achieved progress and upbeat forward-looking projections, some analysts predict relations between China and Japan will remain rocky.

Several unresolved sticking points in bilateral relations still linger, including the legacy of the Second World War, security issues, territorial disputes, and oil and gas resources in the waters of Chinese and Japanese economic zones.

"The difficult issues are going to stay," Prof. Akio Takahara of the University of Tokyo said. "The Chinese Communist Party always has this history card against Japan in their pocket. Whenever they feel the need to take it out, I'm sure they will do that."

Exploring the Origins of the Myth That 'the US Rebuilt China' in Past Decades
But despite the caution, China and Japan — along with roughly 16 other countries of the Asia-Pacific — are now expecting a greater sustainability and higher volumes of regional trade. The new Sino-Japanese accords are also seen as contributing to the ongoing regionalization in trade and a fragmentation in international economic relations.

These concurring processes are expected to divert some Chinese exports away from the US market while giving Japan more bargaining power in its trade discussions with the US. In the longer run, America's trade deficit with both countries is set to decrease, as the Trump administration is also seeking lucrative trade deals elsewhere.

Overall, the Sino-Japanese rapprochement — as temporary and purely economic as it is — is widely seen as helping fix the imbalances in international trade. It is also expected to indirectly benefit the majority of countries in the region — from Russia to Australia and Chile, and from Vietnam to the US and Canada as well.