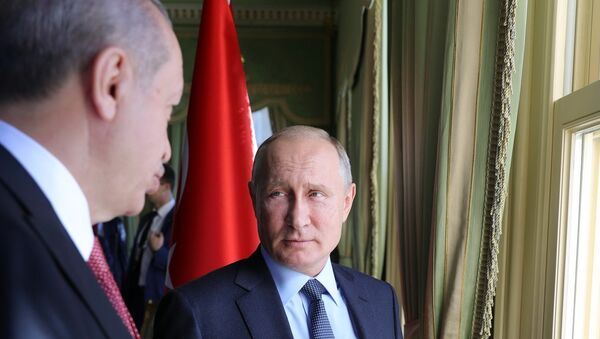 ISTANBUL (Sputnik) - Russian President Vladimir Putin said on Saturday his country will take active steps if terrorists use the Idlib demilitarized zone as a cover to launch attacks on the rest of Syria.

"Should radicals … launch armed provocations from the Idlib zone, Russia reserves the right to give active assistance to the Syrian government in liquidating this source of terrorist threat," the Russian President vowed during a summit on Syria in Istanbul.

He also proposed an initiative to hold an international conference to solve the problem of Syrian refugees.

"We offered partners to support the Russian initiative of convening an international conference on Syrian refugees. We understand what is linked to this issue, we understand the problems, but if we don't work together, we won't achieve any results," Putin said following the quadrilateral talks on the Syrian settlement.

Syria Summit: Putin Arrives in Istanbul to Join Merkel, Macron, Erdogan (VIDEO)
According to the Russian president, the parties agreed to broaden the concept of "humanitarian aid" and to understand it as "supply of medical equipment, medicines, restoration of infrastructure and water supply."

"First of all, it is necessary to ensure the launch of the activities of the constitutional committee in Geneva, which is intended to consider the fundamental issues of the future state system of Syria. At the same time, decisions taken at the Syrian National Dialogue Congress in Sochi should be taken into account," he said after talks with the leaders of Turkey, France, and Germany in Istanbul.

He stressed that such a committee should be recognized as legitimate by all parties in Syria and be respected.

"Only in this case, this structure will be efficient and effective, it will be able to prepare and implement a mature constitutional reform that will strengthen Syrian statehood and unite Syrian society. So, the work on forming a committee must be serious, painstaking, and it needs to be done fundamentally. Russia, as a guarantor of the Astana process, will actively participate in it," the Russian leader continued.

Germany Sees Buffer Zone in Syria’s Idlib as First Step to Ceasefire – Spokesman
Russia hopes that by the end of the year, the Constitutional Committee of Syria will be approved and will work, Putin said, stressing that the work on the creation of the committee should be conducted with respect to the legitimate government of the Syrian Arab Republic, otherwise it would be counterproductive.

There is progress in the creation of a constitutional committee of Syria, but patience is needed, the Russian president added.

"You said that 9 months after the decision in Sochi we didn’t achieve a specific result. I want to remind you that before the start of the Astana process, the parties didn't meet at all for a year. This process simply stalled," Putin recalled.

According to the president, "nothing happened at all" over that period. Then, as he noted, the Astana process was initiated, and "the wheel began to spin on and on."

"Yes, the agreements reached are not being implemented as quickly as we would like, but there is still some progress. We managed to persuade the Syrian government to submit its part of the list for the formation of a constitutional committee. This is not an easy process, yes, there must be people who are trusted by all parties involved in the conflict. But we need patience and respect for all participants in the process. Only on this path will we succeed," he said.

The Russian leader also underlined that only the Syrian people can decide for themselves.

"Our principled position is that the fate of our own country, including the choice of personalities on the political scene, should be determined by the Syrian people themselves," he said after talks with the leaders of Turkey, France and Germany in Istanbul.

He noted that certain conditions must be created for this, one of which is the launch of the political process to form a constitutional committee and the beginning of its work. Participants of the summit in Istanbul did not discuss any personalities regarding the Syrian leader, since this is counterproductive, the president added.

Arms Pullout From Idlib Opens the Door to Peace Process – Syrian Opposition
On Saturday, Putin, as well as French President Emmanuel Macron, German Chancellor Angela Merkel and Turkish President Recep Tayyip Erdogan made a joint statement in Istanbul following a meeting dedicated to the Syrian crisis and other international problems.

In January this year, the Syrian National Dialogue Congress was held in Sochi. Its main result was the decision to establish a constitutional commission that will work in Geneva.