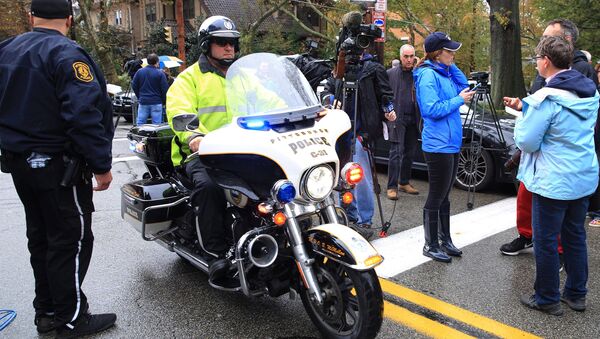 The identity of the gunman hasn’t yet been officially confirmed, but media reported citing their sources that the alleged gunman, who is for now in custody, is named Robert Bowers and he is in his mid-40s.

Robert Bowers, who is currently in custody following the attack, is believed to have been previously promoting anti-Semitic and anti-immigrant conspiracies and have called to kill the Jews. Separately, a law enforcement official told CNN the shooter made anti-Semitic statements during the shooting. His identitity as that of the suspect in the attack hasn't been officially confirmed by law enforcement yet.

Multiple netizens claimed his latest posts contained anti-Semitic rhetoric, some tweets suggesting that he is allegedly a Trump-hater and believed that President Trump was controlled or supervised by Jews.

"Trump is a globalist, not a nationalist," he previously posted, which was quickly picked up on by social media users.

Bowers was reportedly an active poster on the social network Gab, which is viewed by many as a hub of the extremist right-wingers.

Here are some more gab posts/reposts from Robert Bowers who some have named as the synagogue shooter. pic.twitter.com/7CuhR8jztC

In his bio section, Bowers wrote that "jews are the children of satan. (john 8:44) — the lord jesus christ is come in the flesh," The Times of Israel reported.

His name is Robert Bowers. He is a 46-year-old white man. Here is his social media account. Notice the Anti-semitism. pic.twitter.com/ExDGqQNZrN

The deadly attack unfolded on the morning of October 27 at the Tree of Life Congregation in the Squirrel Hill neighborhood of Pittsburgh, US. There were nearly 100 people inside of the synagogue at the time of the attack, which left 8 of the 12 shot dead and the rest injured. The shooter surrendered to Pittsburgh police and was transported to Mercy Hospital, Curt Conrad, chief of staff for City Councilman Corey O'Connor told CNN.