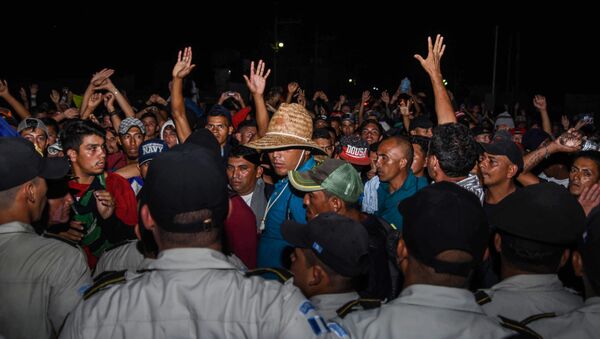 Mexican authorities are offering migrants food, shelter, medical aid, schooling, and jobs but say they must turn themselves in and apply for refugee status inside the country.

Militia Groups Gear Up to Protect US Border Against Migrant Caravan
However, the vast majority of migrants have denied the offer, voting against it in a show of hands in the town of Arriaga.

Hundreds Leave Migrant Caravan on the Way to US Border – Mexican Authorities
In the meantime, the US is preparing to defend the country's border against the wave of migrants, with the Pentagon sending 800 troops to reinforce a 2,000-strong National Guard crew already stationed at the border. Additionally, civilian groups have begun gathering at the border, willing to provide a helping hand against those who decide to cross the border illegally.