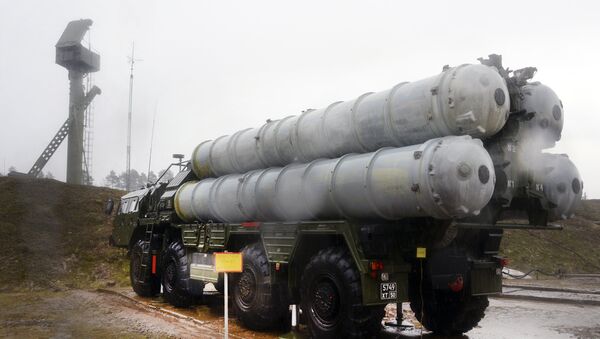 © Photo : Russian Defense Ministry
Subscribe
Earlier this month, Russia completed the deliveries of its S-300 air defense systems to Syria in a bid to improve the security of the nation's troops deployed in the Middle Eastern country.

The Israeli satellite imagery company iSi has unveiled what it claims is the first site for one of the S-300 long-range surface-to-air missile systems, delivered by Russia to Syria.

The company identified the location as a pre-existing air defense base in the northwest of the town of Masyaf.

#Imagesat #intelligence report #reveals the current location of the first #Syrian #S300 #battery which was recently received from #Russia.

For additional #imagery and #insights regarding the new #SAM deployment near #Masyaf, #Syria, visit our website: https://t.co/IGkXvfIZs2 pic.twitter.com/lXX0u2rHzD

The satellite images from October 22 featured large vehicles under camouflage nets that the iSi claimed were S-300 systems deployed at the aforementioned base, while another image, dated October 24, showed four alleged S-300 transporter erector launchers near a newly constructed deployment post.

We found it!#Breaking: #imagesat #intelligence report reveals the location of the first #Syrian #S300, which arrived from #Russia during the last days of September 2018. pic.twitter.com/fXMRSUHFYd

At the same time, iSi claimed that the deployment was not operational yet.

The Syrian military hasn't commented on the reports yet.

UK Spy Plane Reportedly Spotted Near Syrian Border Amid S-300 Delivery
The delivery of 49 units of S-300s was finalized in early October, with the Russian Ministry of Defense stating that the Syrian army would spend the next three months learning how to use the systems.

In late September, the Russian Ministry of Defense announced that it would provide Syria with S-300s to boost the security of Russian servicemen stationed in the war-torn country.

The decision was made in the wake of the inadvertent destruction of a Russian Il-20 military reconnaissance aircraft by Syrian air defenses responding to an Israeli air raid.

The Russian military has blamed the crash on the Israeli Air Force, stressing that an Israeli fighter jet had used the Il-20 as a shield against Syrian air defenses. Tel Aviv, in turn, has flatly rejected the accusations, claiming that it had warned Moscow about the air strikes in the region in a timely fashion.