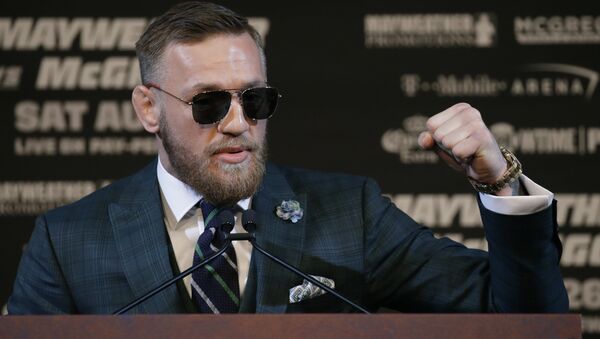 Many Twitter users, although admitting to being huge Conor McGregor fans, would rather abstain from voting for him as president. Despite the fighter’s overwhelming popularity, most have come to believe that otherwise it would be a pure and simple “circus.”

MMA icon Conor McGregor wasn’t officially registered as a presidential candidate for the Irish vote on Friday, but that however, didn’t stop Dublin resident Neil Tolan from adding his name to the ballot and putting a check there.

Alongside a photograph of his ballot that sported a miniature figure with massive biceps, Tolan tweeted that “what we need is a real president,” referring to McGregor, commonly known as “The Notorious.”

The sportsman instantly retweeted the post, after he was tagged in the picture, and the latter went on to circulate around the internet thanks to McGregor’s whopping 7.5 million-strong army of followers.

One user enthusiastically claimed that if it really was the case, no country would “mess with a [sic] President Conor McGregor!!!”

Some others, however, thought Tolan should be ashamed, citing “disrespect” for the historically important nationwide event:

I’m a McGregor fan myself but to spoil your vote like that, a vote that our ancestors fought so hard to secure for us shows an absolute lack of respect and is in my opinion disgraceful and for what, just to get a re-tweet from McGregor?

A true republican would not of spoiled his/her vote!

Some naturally referred to “a circus” by posting a bunch of hilarious memes:

Some explicitly disagreed, citing McGregor’s “goat” behavior in the MMA ring and beyond:

No offense Mr. Notorious,but you'd shit talk the world into another word war.. You a GOAT in MMA and own an underppreciated whiskey brand (Better Bushmills aka Proper 12) but I rather not have you lead a nation.

Citizens of the Republic of Ireland went to the polls on Friday to cast their vote for who they consider to be the best candidate for country’s head of state. For now, exit polls suggest that the incumbent president, Michael D Higgins, will win a landslide victory over his five rivals with 60 percent of the vote and start a second 7-year term.