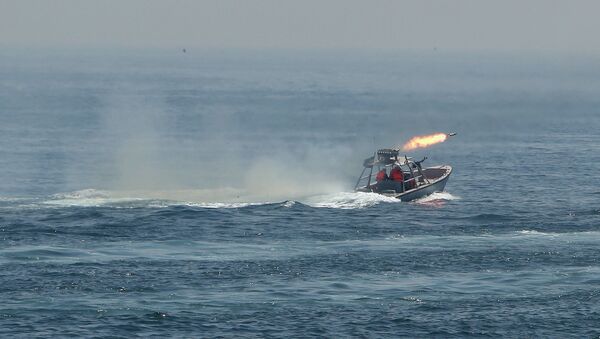 The US 5th Fleet, currently deployed in the Persian Gulf, has reported multiple confrontations with Iranian forces in recent years.

Even though it is unlikely that Iran’s Islamic Revolutionary Guard Corps were in the know that the US top commander in the Middle East was on board, they might have gotten a hint or two watching a pair of his V-22 Osprey helicopters landing on the Essex as a demonstration flight by one of the ship’s F-35 vertical take-off and landing fighters.

Iran's Zarif Blasts US Gulf Buildup, Notes US Navy Over 7,000 Miles From Home
The Iranian armed small boats came within about 300 yards of the Essex, apparently interested in the F-35’s maneuvers.

General Votel later told reporters traveling with him to the Essex that the IRGC is trying to keep an eye on what the US is doing in the region.

The IRGC boats routinely shadow US warships in the region, taking photos and collecting information. They have previously also launched drones to fly over and observe US ships.

According to Navy Captain Jerry Olin, commodore of Amphibious Squadron One, which includes the Essex and two other ships with her in the Gulf, the Iranian boats acted safely and professionally. He added that when the small boats come in "relatively close" and take photographs of the ships, their crews use loudspeakers to communicate with the boats and tell them to keep clear.

There are hundreds of Iranian fast boats operating in the region, Captain Olin said.

Earlier this month, Alireza Tangsiri, the IRGC's navy chief, said that Iran has full control of the Strait of Hormuz and the Persian Gulf. The statement came after Iranian officials threatened to block the Strait of Hormuz, cutting off the main oil shipping route, in retaliation for any hostile moves by the US.

The US 5th Fleet, which is currently deployed in the Persian Gulf, has reported multiple confrontations with Iranian forces in recent years. In one of the latest encounters, an unarmed Iranian drone shadowed a US aircraft carrier on the night of August 24, 2017.

Two weeks earlier, the same type of drone came close to a US fighter jet while it prepared to land on an aircraft carrier, forcing the pilot to change course.

On July 25, 2017, the patrol ship USS Thunderbolt fired warning shots at an Iranian patrol boat in international waters, because it reportedly came to close to US vessels and refused to change course.

The already-strained relations between Tehran and Washington became further exacerbated in early May, when US President Donald Trump announced a US pullout from the 2015 Iran nuclear deal.