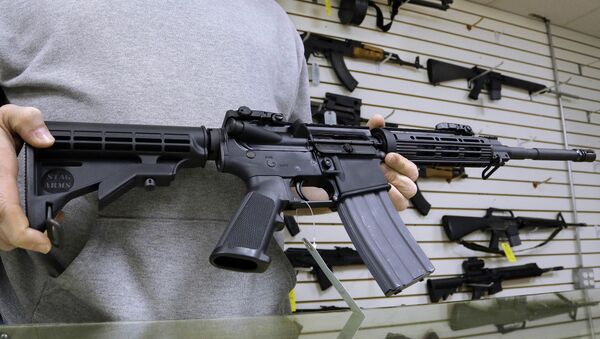 © AP Photo / Seth Perlman
Subscribe
Civilian activists carrying guns and bulletproof vests are assembling at the US’ southern border in order to lend support to the US National Guard and Border Patrol, as a caravan of several thousand undocumented migrants moves towards the border.

US citizens bearing arms and gear are preparing to reinforce the US southern border, along with the Border Patrol and the National Guard, in order to stop the caravan of illegal migrants from crossing into the US.

Right now, it is unclear how many militia members will arrive at the border to face the first caravan, which is currently estimated to include some 4,000 people — mostly citizens of Honduras — who seek to enter the US in order to improve their economic situation.

The caravan is currently located some 1,000 miles from the border and estimated to be more than a week from arriving there.

Children Trafficked in Migrant Caravan Rescued in Guatemala
The US Border Patrol this week warned local landowners in Texas that it expects "possible armed civilians" to come onto their property because of the caravan.

Three activists told reporters that they were going to the border in order to organize other soon to arrive volunteers. They also disclosed that concerned groups on Facebook have urged people to mobilize in the face of the migrant caravans.

It is "imperative that we have boots on the ground," one such post reads. "WAR! SECURE THE BORDER NOW!" another one reads.

The militias are expected to bring guns and tactical gear, such as bulletproof vests.

Shannon McGauley, president of the Texas Minuteman militia, said he has members at three points of the state's border already and expects 25 to 100 more people to arrive in the coming days.

"They're just laughing in our face," McGauley commented on the caravan. "It's a free-for-all in America."

DHS Confirms There are 'Gang Members' in Migrant Caravan Bound for US
Militia members and volunteers patrolling the border is a practice that has been in place for decades. Usually, the civilians patrol the border and look out for illegal border crossers. Once they spot a trespasser, the civilians usually contact the Border Patrol to apprehend them. This practice has not been without problems. In 2009, a militia member Shawna Forde killed two US citizens, Raul and Brisenia Flores, during a raid on what she thought was a drug house near the border in Arizona.

People from other states have raised money to assist the militias with supplies and equipment. Monica Marin, an Oregon resident, said she has raised about $4,000 online to help militias buy supplies.

Mattis Approves Security Reinforcement at US-Mexico Border - Pentagon
Marin said she is acting because the migrant caravans are dangerous, citing claims by watchdog groups, the US Department of Homeland Security and US President Donald Trump himself that people from Middle East and other far-away countries, as well as criminal gang members, are mixed in with the crowd of Central Americans. As Sputnik reported earlier, seven children being covertly trafficked in a second caravan currently moving through Guatemala were rescued by Guatemalan law enforcement Thursday.

On Friday, US Defense Secretary James Mattis authorized dispatching of 800 US troops to reinforce the 2,000 National Guard staff already located at the border to address the caravan issue.