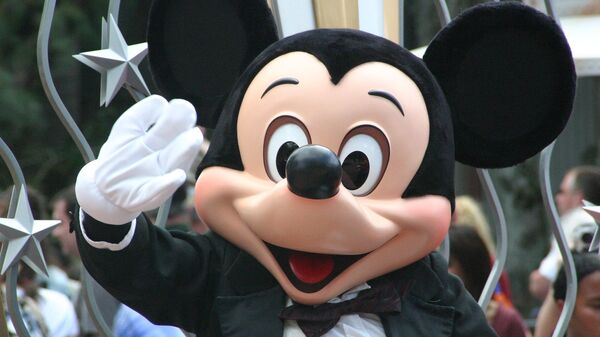 Speaking on the Ellen DeGeneres Show, Knightley said she didn't let three-year-old Edie watch Cinderella, as the titular princess "waits around for a rich guy to rescue her".

"Don't! Rescue yourself! Obviously…" she explained, before adding The Little Mermaid was also prohibited viewing in the (presumably lavish) Knightley home, on the basis the piscine protagonist "[gives] up her voice for a man" — although she acknowledged she was "quite annoyed" at having to proscribe it, given she "really [likes] the film" and "the songs are great".

Not all Disney films are no-go for Knightley's daughter, however, with Knightley endorsing Finding Dory, Frozen and Moana in particular. Presumably however Edie also won't be watching Pirates of the Caribbean, the Disney franchise that arguably launched Knightley's mainstream career, any time soon — after all, the first instalment of the seemingly endless series, 2003's Curse of the Black Pearl, is centered around Jack Sparrow (Johnny Depp) and Will Turner (Orlando Bloom) rescuing Elizabeth Swann (Knightley) after she's kidnapped by pirates.

Viral
Disney Nightmares: Headless Ursula Bot Keeps Singing (VIDEO, PHOTOS)
After she's rescued however, Elizabeth quickly manages to get stranded on a remote island. She's then rescued again, this time by "rich guy" Lieutenant James Norrington (Jack Davenport), whom she agrees to marry in return for rescuing Will — the man she actually loves — from the clutches of Captain Barbossa. The movie ends with Elizabeth's father giving her and Will his blessing to marry.

A damsel in almost permanent distress who can never save herself, uses bogus affection to emotionally manipulate men into doing her bidding, and needs dad's permission to wed? By comparison, plucky Cinderella stacks up very robustly indeed.

True, she doesn't 'stand up' for herself via drawing up escape plans, using physical force to free herself, refusing to outwardly acknowledge her torment or other traditionally masculine means of resistance, but Cinderella manages her ordeal by being unfailingly kind and simply persevering, making the best of bad situation with dignity and decency, doing the best she can in an extremely unfortunate situation, and not simply waiting to be rescued.

Far from ordering young girls to complacently accept their abuse, Cinderella sends a palpable message to viewers to remain strong in the face of adversity — and to suggest otherwise may well be to engage in victim blaming of the rankest kind, akin to blaming a wife for not leaving her abusive husband.

Knightley's slander of Ariel is equally gross, not least because the mermaid was once held up as a revolutionary character in Disney's oeuvre, a far more ‘active' prime mover than previous animated principals.

"Ariel is a fully realized female character who thinks and acts independently, even rebelliously, instead of hanging around passively while the fates decide her destiny. She's smart and thinks for herself," renowned film critic Roger Ebert wrote in his contemporaneous review.

© RIA Novosti/Avrora
It's debatable whether comparable statements can be made about any of the characters Knightley has played over the course of her career, but I digress. As Ebert notes, like Cinderella, Ariel isn't waiting to be rescued — she instead regularly risks her life to uncover artifacts from dangerous shipwrecks, due to her fascination with human world. Meeting Prince Erik provides her with the opportunity to achieve her lifelong goal of living among humans on land, in the process freeing herself from the domination of her aggressive, abusive, bullying father.

Two media studies academics, Erica Scharrer from the University of Massachusetts and Chyng Feng Sun from New York University, studied the film and produced a study in 2004 — Staying True to Disney: College Students' Resistance to Criticism of The Little Mermaid — which found older female fans of The Little Mermaid still considered Ariel to be a strong role model, despite being aware of arguments to the contrary.

Knightley has conversely given up everything to be with a man — on screen, as Cecilia in 2007's tragic romantic war film Atonement. The movie received a ‘15' certificate upon release, meaning it'll be some time before stripling Edie is deemed mature enough to watch the film by the British Board of Film Classification.

However, her mother may well also preclude her from watching it after she's celebrated her first decade-and-a-half on the planet, as an empowering and positive image of women Atonement certainly doesn't paint. Cecilia is in love with Robbie (James McAvoy), which she only reveals to him after he accidentally sends her a lewd note, in which he refers to his designs on her "wet c***". Upon confession, they immediately engage in passionate sex in a stately home's voluminous library, only to be interrupted by Cecilia's young sister Briony.

Later that evening, when the pair's cousin Lola is victim of a paedophilic rape by family friend Paul (Benedict Cumberbatch), Briony bears false witness to ensure Robbie's arrest and prosecution for the crime, leading to his imprisonment and conscription into the British army during World War II five years later — during which time, Lola marries her rapist.

Nonetheless, Briony eventually apologizes to Robbie and Cecilia, and the pair are eventually reunited and live happily ever after — albeit only in Briony's imagination, as it's revealed Robbie died of septicaemia at Dunkirk on the morning of the day he was to be evacuated, and Cecilia drowned months later in the Balham tube station bombing during the Blitz.

Briony, a successful novelist, is in fact writing an idealized version of the story in the hope of giving the pair the happiness she robbed them of in real life — because of course a totally fictional (and potentially lucrative) account of their non-existent relationship in book form is punishment enough for ruining people's lives with false rape accusations.
Newsfeed
0
Access to the chat has been blocked for violating the rules . You will be able to participate again through:∞. If you do not agree with the blocking, please use the feedback form
The discussion is closed. You can participate in the discussion within 24 hours after the publication of the article.
To participate in the discussion
log in or register
loader
Chats
Заголовок открываемого материала