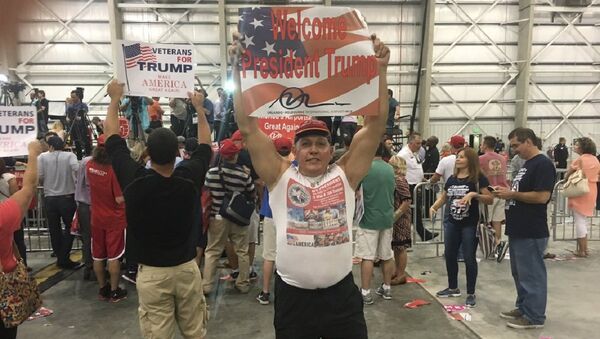 Very little information about accused US pipe bomb mailer Cesar Sayoc has been released through official channels. US Attorney General Jeff Sessions, FBI Director Christopher Wray and NYPD Commissioner James O’Neill were characteristically tight-lipped in their press conference about the case on Friday.

"I may not be able to answer questions about his background or his motive," Wray said at the beginning of the presser.

Fortunately for curious minds, Sayoc had been posting on social media for years. Unfortunately for knowledge-seekers, Facebook quickly removed his account before anybody archived his posts.

Sputnik News viewed one video posted on Sayoc's Facebook page prior to its removal. It appeared to be cellphone footage from then-candidate Donald Trump's rally in Columbus, Ohio, in October 2016.

Sayoc's Twitter account, however, was not taken down until hours later. Sputnik News reviewed its contents and found a seemingly endless string of threats to public figures, many of which followed similar, incoherent patterns.

In replies to individuals, Sayoc frequently accused them of making threats, which would be followed by the assertion that "we unconquered Seminole Tribe going answer your threats." What followed would typically be a warning to hug their families "real close," telling them that they are "next," "we are coming" and "tick tock."

Typically, those tweets would include a series of images, often repeated throughout various posts over the course of months, containing things like deadly snakes, alligators, beheaded animals and screenshots of news reports of people gone missing in the Florida Everglades.

Reporter Rochelle Ritchie posted screenshots of threats Sayoc had made to her alongside Twitter's response to complaints that she had made over them: "We have reviewed your report carefully and found that there was no violation of the Twitter Rules against abusive behavior."

Some of Sayoc's posts seemed to praise violence against LGBTQ people, including one which contained images of Daesh throwing gay people off a building, which read, "Hail to ISIS cleaning up world." He also called on Russia to make gay people "disappear again."

Many of Sayoc's posts copied old ones word for word and image for image, some dozens of times. He appeared to believe a number of conspiracy theories, but the most obvious insight into the man's mind is that he was largely incoherent and staunchly pro-Trump.

While Sayoc's entire Facebook page was not archived, the "About" section was. In it, he lists only Donald Trump under "Inspirational People." Under his "Favorites Quotes" section is a long, rambling screed that ends with "we slaughter men for pay back."

Sayoc's LinkedIn page remains active at the time of this article's writing. In it, Sayoc brags that his grandfather "over through [overthrew] Communist Philippines liberated island" and claims he is schooled in the martial art of "Kali," which was "used to overthrow communist party." He also claims to be a "Horse Doctor." On LinkedIn, Sayoc's employment history includes working as a choreographer and promoter for burlesque shows and male strippers.

If convicted on all five federal charges he faces, he'll face a maximum sentence of 48 years behind bars.