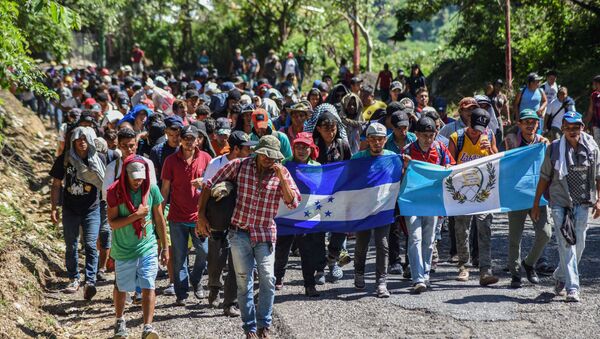 © AFP 2023 / ORLANDO ESTRADA
Subscribe
International
India
Africa
US Defense Secretary James Mattis is expected to sign an order that would send at least 800 US troops to the border with Mexico as a caravan of thousands of migrants heads towards it. The troops would join 2,100 National Guardsmen at the border.

An official who spoke anonymously to Fox News said that the active duty soldiers will be there in order to offer "logistical support" to the National Guard.

"In this country, we have laws that say very explicitly… that armed forces are not to be involved in the enforcement of civil laws; civilian law," Isabel Garcia, co-founder of Coalición de Derechos Humanos, told Radio Sputnik's Loud & Clear. "We've actually gone to Congress in decades past, where the military has agreed with us that they have no place along the border because they are trained to kill."

​Garcia said that the troop deployment is a "violation of the Posse Comitatus Act." The law, passed in 1878, forbids the military from deploying its personnel for the purpose of law enforcement except when authorized by Congress.

Department of Homeland Security Secretary Kirstjen Nielsen told Fox News on Thursday, as the caravan was still more than 1,000 miles away from the US border, "We do not have any intention right now to shoot at people." While she said DHS currently has no plans to shoot at anyone, she added, "I also take my officer and agent- their own personal safety extraordinarily seriously. They do have the ability, of course, to defend themselves."

"I want to make it very clear we will absolutely not tolerate violence against Border Patrol [officers] in this situation," the secretary said.

Garcia noted that migrants have been using caravans to get to the United States for years, stressing that it's "because of the desperation being felt in those Central American countries," adding, "It's outrageous that we are responding in a militaristic fashion when these are desperate human beings."

Garcia suggested the caravan should be used as an opportunity to reflect on American policy in Central America that has contributed to the migrant crisis. Most of the people on the caravan, she says, are from Honduras, and Washington is "supporting a horrific illegal government" there. In fact, Garcia told Loud & Clear hosts Brian Becker and John Kiriakou, the US "props up" said government.

Honduras has been governed by a military dictatorship since the 2009 coup, which was backed by the United States. Lanny Davis, a powerful Democratic lobbyist and confidant of Hillary Clinton — who was US Secretary of State at the time of the coup — used to represent the Honduras Business Council, which also backed the military takeover, according to released emails from Clinton. Clinton pitched Davis as the go-between for the US State Department and the Honduran military after they deposed former President Manuel Zelaya from power.

The Honduran migrants "are coming because they are feeling the desperation, the violence, of that illegitimate government," Garcia said.