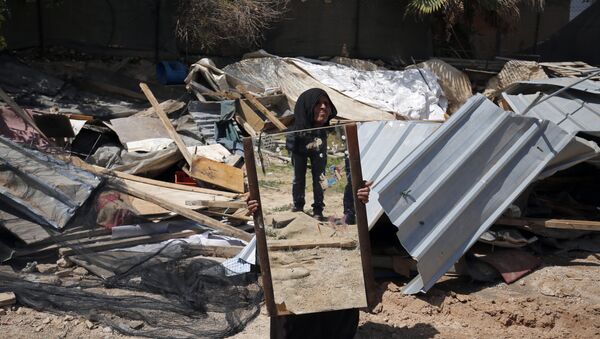 Brutality by Israeli police has been placed in the spotlight recently by several cases involving encounters between law enforcement on one side and Bedouin Arab or Orthodox Jewish communities on the other. Not just community activists but also international bodies have pushed back, demanding that the police face consequences for their actions.

Noa Levy, head of Police Project in The Public Committee Against Torture in Israel, spoke with Radio Sputnik's Loud and Clear Friday about how police brutality plays out in interactions between the Israeli police and various oppressed groups, how police brutality affects the communities that experience it, and what can be done to stop it.

"The patterns [of police brutality] are very similar to the political structure in the country," Levy said. In the US, racial conflict is often the most readily apparent aspect of police violence. In Israel, in contrast, "the national conflict is the first problem [that we see], we don't see the problem between Jews and Arabs as a problem between races — we are the same race, Jews and Arabs, we are just different nations," Levy said.

"Umm al-Hiran, is a very, very famous case… in which the police were sent to evict a Bedouin village. Bedouins are Arabs that live in the desert in tribal ways still untouched by modernity — in a way they do have modernity but they still live in the unrecognized villages in the desert — and Israel has sent the police to evacuate them from their houses. What for? To build a new village for Jews on their land," Levy said.

​"So this was the background for one of the most famous police brutality incidents in Israel in the last few years. An old teacher, who was one of the residents supposed to be evicted, was killed, was shot dead by policemen in this incident. At least 10 others were injured and hurt by police brutality," she explained, noting that a police officer was also killed when he was struck by the teacher's runaway car — the old man had been shot while driving. "So it was a very, very big and famous scandal of the police trying to do… a military project: to take over land, to take off the residents, put other residents and colonizers [on the land] instead. In this context you can see exactly how the political problems in Israel show themselves inside these police brutality cases."

"I run a project with hundreds of police brutality victims, and what we see is that they're usually either Arab, or black — like Ethiopian Jews — and then there's the Orthodox, they say the ultra-Orthodox Jews, the ones that many people are used to seeing in other countries of the world. In Israel they're a minority, because the majority of the Jews in Israel are secular, so the ultra-Orthodox are also facing some police brutality in their struggles. That, in addition to any group that protests against the government — then, police brutality is equal to all."

Levy told hosts Eugene Puryear and Sean Blackmon that accusations of extremism, like those alleged about Yacoub abu al-Qia'an, the Bedouin man killed at Umm al-Hiram, are made by "not only the police. Generally, whenever Israel kills, or happens to kill, an Arab, the Arab is immediately a terrorist," she said. "In this case, what happened was that Yacoub al-Qia'an, who was indeed a 90-year-old teacher, math teacher, with a whole family — by the way his Jeep, which they shot, was full of all his furniture and clothes because he was actually evicting his house, that was all he was doing — and the police needed an excuse, and therefore immediately, in the next day, they published, to all the media in Israel, an announcement saying that he was actually connected to ISIS [Daesh], no less!"

Levy noted that the only evidence the police furnished for this spurious accusation was that next to him in his Jeep, police found a newspaper article about Daesh.

Levy told Sputnik that the entire village of Umm al-Hiran was one family, and that even though the public outrage was great enough to halt the demolitions on the day of al-Qia'an's death to "only eight or 10 houses," the Israeli state has not supplied them with another village such as they demanded when they agreed to give up their remaining houses.

"The family itself takes this whole story very hard, this family has suffered a lot of assaults from the police." Levy described how another family member was assaulted at the grocery store he works at in Tel Aviv later that month by police officers for speaking Arabic. "This family has this feeling that no matter what they do, they meet the same policemen, the same places, and are being targeted again and again. The damage to the trust between the citizens and the state is tremendous." This however, probably doesn't trouble the state of Israel very much, she said.

Levy noted another situation that has unfolded differently, that of Khan al-Ahmar, another Bedouin village that was slated for destruction until Israeli Prime Minister Benjamin Netanyahu froze its demolition on October 21, AFP reported. This happened, Levy said, because of heavy protests by the European Union and "the coordinator of the EU moved into the village to stay there to demonstrate to the Israeli authorities that this will not happen again. And in this case, it succeeded."

"As Israelis, we want the police to have responsibility [for] their own actions. We want them to stop and not cause any more demolitions, we don't want to be repeating victims — not us, not anyone in our area… without international pressure, we cannot change the root of our own government, which is, of course, regretful."

Despite appearances, Levy said, Israel is a secular-dominated country, a fact that in the last few years has brought the state into conflict with the ultra-Orthodox community, who were formerly exempt from military service. Israel's Supreme Court struck down their mass exemption as unconstitutional in August 2017, but opposition parties have tried since then to get a new measure passed that would reinstate the ban, which provides a three-year exemption for students in yeshivas, or religious seminaries for studying the Torah.

Since Orthodox Jews refused military service, those who do not answer Israel's conscription calls are jailed as deserters. "Almost every family has got a son who is now supposed to be recruited to the army, and they all stay at home, and then every family is actually terrified of the police because any policeman who stops any guy between the ages of 18 and 26 can arrest him and send him to prison. " Thus, "every encounter of an ultra-Orthodox person and a policeman in the street becomes a conflict and becomes a scary thing."

"That's why there are mass demonstrations of the Orthodox in Israel now, and these demonstrations are with extreme… police brutality… they use stun grenades, tear gas, they use an Israel invention… called ‘the skunk,'" which is a water cannon that spews malodorous water, Levy explained. "It stinks in a way that stays on you for about two weeks… in the past it was used only in the Occupied Territories, against Palestinians, but since the Orthodox began their protests it is used repeatedly against the ultra-Orthodox which means their neighborhood literally stinks. The situation gets wider and wider, more and more get arrested, either in demonstrations or in their houses when they're being recruited to the army. And in this situation, they meet a lot, a lot of brutality."