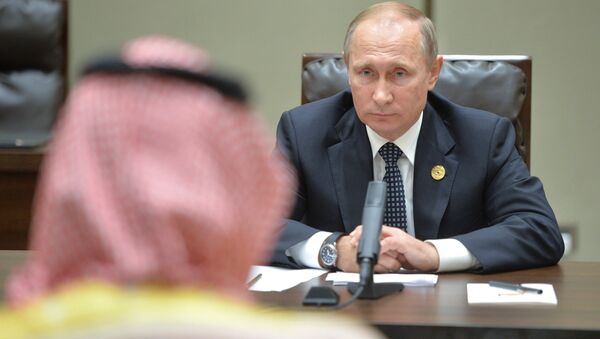 Earlier in the day, Saudi Prosecutor General Saud Mujib said that the suspects in the murder of Khashoggi had committed the crime deliberately, adding that the whole incident was premeditated.

"The leaders exchanged views on the Syrian crisis settlement and the current state of affairs in the Middle East region as a whole," the Kremlin press service said in a statement, adding that the situation around the murder of journalist Jamal Khashoggi was also on the discussion agenda.

King Salman bin Abdulaziz Al Saud confirmed that Riyadh had invited Russian President Vladimir Putin to visit Saudi Arabia. According to the statement, the sides thoroughly discussed the issues of further development of multi-sided bilateral cooperation, including in the energy sector.

Meanwhile, the governmental Saudi Press Agency reported that King Salman briefed Putin, during their phone talks, on the investigative measures taken to uncover all the circumstances of Khashoggi's murder and also on the effort that the Saudi government was making toward bringing those responsible to justice.

Earlier this month, the Russian president addressed the case, stating that Moscow needed more information on the investigation into Khashoggi's death to make a decision on the issue.

Iran's Rouhani Claims Khashoggi Murder Was Backed by US
Jamal Khashoggi was a columnist for The Washington Post and a prominent critic of Saudi policies. On October 2 he entered the Saudi Consulate in Istanbul and has not been seen since. Riyadh initially denied reports that Khashoggi had been abducted or murdered in the consulate, but on October 19, Prosecutor General Saud Mujib stated that the journalist had died during a fight inside the consulate.
Newsfeed
0
Access to the chat has been blocked for violating the rules . You will be able to participate again through:∞. If you do not agree with the blocking, please use the feedback form
The discussion is closed. You can participate in the discussion within 24 hours after the publication of the article.
To participate in the discussion
log in or register
loader
Chats
Заголовок открываемого материала