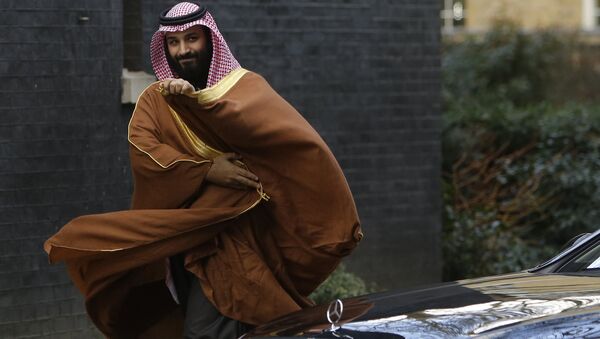 The Khashoggi case has thrown up many urgent questions for the international community, not least whether it is now ethical to continue selling weapons to a regime which doesn’t hesitate to annihilate its opponents. Many would argue of course, that it never was.

The brutal murder of the Washington Post writer, and one time friend of the Saudi royals, in its blatant disregard for international law has churned up issues which had been successfully brushed under the carpet for years. Germany has been the first country to declare it can no longer justify the sale of arms to the Saudi Kingdom – the question is which western countries will bite the bullet and follow suit?

Or under a US administration driven by a former billionaire businessman will the world see that indeed, money talks louder than any screams could from the grave of a Saudi dissident? Sputnik spoke to political analyst, Catherine Shakdam for more insight on the issue.

Crown Prince Calls Khashoggi's Murder a Crime 'Painful to All Saudis'
Sputnik: Germany has been the first country to declare it can no longer justify the sale of arms to the Saudi Kingdom – the question is which western countries will bite the bullet and follow suit? Or under a US administration driven by a former billionaire businessman will the world see that indeed, money talks louder than any screams could from the grave of a Saudi dissident?

Catherine Shakdam: Well I would say that when it comes to Washington I would say that money speaks louder than anything else. I think that President Donald Trump actually made this very clear early on in the Khashoggi case when he said that one man’s fate was not worth cancelling billions of dollars’ worth of contracts.

And I think this is something that Washington will stay true to. Now when it comes to European capitals and I do think that Paris will definitely do something. Only for the reason that it is the second time that Saudi Arabia has committed a crime so grand that it’s very difficult to look away.

Erdogan’s Aide Says Saudi Crown Prince Responsible for Khashoggi's Death
If you remember what happened with Prime Minister Hareri in Lebanon, France had to intervene. So I think that Saudi Arabia is looking more and more like a rogue state rather than a partner really when it comes to foreign policy and the ability to be able to justify and rationalize ties.

When it comes to London I’m not so sure because I do think that Theresa May will toe the line and follow suit when it comes to Washington’s leadership.

I’m hoping to be wrong because we are at a juncture in history where we do need to set an example and hold to more standards.

And I do understand that the rationale is that Saudi Arabia can buys weapons anywhere – and this is true of course – but I do think the international community needs to set an example and, loudly.

Iran's Rouhani Claims Khashoggi Murder Was Backed by US
Sputnik: Much of the blame for this incident is being laid at the feet of Crown Prince Mohammed Prince Salman – what is the future for him? Will he recover from this?

Catherine Shakdam: I think it is very possible in the sense that he is actually moving right towards a very radical line in that he is trying to seize power by force.

He has already removed a lot of people who are close to the king in terms of advisors. A lot of the royals have been actually sidelined for a while now, and even more so since the incident. So I think he will try to seize power; his father has actually release a tape where he is handing over power to his son and this is something which is the worst kept secret in Riyadh. So it’s very possible that now he is being cornered so he might play that card.

At the same time it’s possible that others will force him step down because he has become so unreliable and so tainted that no world leaders would want to deal with him. This is kind of the line that Congress is taking and several senators have actually come out and said that they would not want to see him anywhere near the crown or anywhere near a senior position in terms of the government.

So we shall see but I’m not overly optimistic as we are talking about someone who is profoundly irrational, he is very hungry for power and no-one in Saudi Arabia has had the courage to oppose him and I don’t think that world leaders have taken a strong enough stance in opposing him either. So it’s anyone’s game right now I would say.

Views and opinions expressed in this article are those of Catherine Shakdam and do not necessarily reflect those of Sputnik.