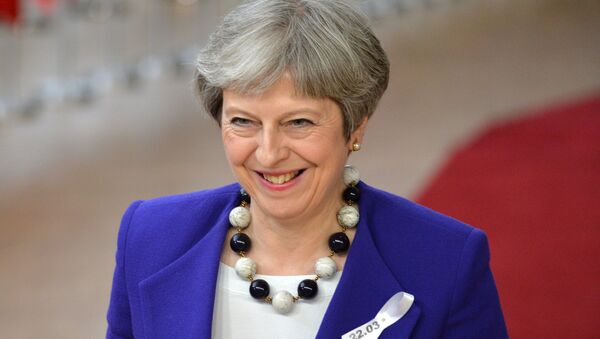 © Sputnik / Alexei Vitvitskiy
/
Go to the photo bank
Subscribe
The UK is about to sign up for a customs workaround for the Irish border that will have no end date and no way of being broken, Attorney General Geoffrey Cox warns, urging to accept the inevitable; either dropping the backstop clause, or dropping the Brexit deal entirely.

It will be almost impossible to get out of Theresa May's Chequers deal on Brexit, once it has been adopted, UK Attorney General Geoffrey Cox warned ministers Wednesday.

Chances of Getting Chequers Brexit Deal Through Parliament Are Low - Professor
The backstop is supposed come into force in the event there is a gap between the transitional period, during which UK-EU relations will stay mostly the same, and the "future relationship," preventing the emergence of the hard border between the two Irelands during that time.

However, the Chequers deal's current wording contains no end date, which has sparked fierce criticism from a number of ministers, who have accused Theresa May of trying to extricate herself from her current predicament by adopting the backstop concept without a clause that would allow it to later be broken.

Brexiteers are pushing for an "escape clause" that would allow the UK to break the backstop, in order to keep the UK from what they see as "permanent vassalage" to the EU.

'Catastrophe for Brexit': Johnson Slams May's Plan to Remain in Customs Union
Speaking before the Cabinet Wednesday, the Attorney General said, however, that it would not be possible to change the customs backstop once the UK signs up to it, The Telegraph reported.

Therefore, the UK government should either accept a backstop without the possibility of getting out of it later on, get rid the backstop clause from the deal, or push for a hard "no-deal" scenario, he told the Cabinet.

The latter option would introduce a proper border between the two Irelands, complete with customs, checks and limited freedom of movement.

Speaking before the Cabinet earlier on Tuesday, Cox compared the Ireland backstop to being "stuck in Dante's first circle of Hell."

EU Brexit Official Rejects PM May's Assessment of Talks Progress
In the meantime, Prime Minister May enjoyed a display of massive support from the Tory party's 1922 Committee. While observers had predicted the weekly meeting would be a "show trial" for May, with one MP even suggesting the PM should "bring her own noose," the Committee instead welcomed her by banging on desks and doors in a show of support, Express reports.

"It was encouraging. Everyone was praising her," Tory MP Michael Fabricant said, referring to Theresa May's speech before the committee.

However, Brexiteer MPs have accused the PM of staging the entire event.

"The whips will communicate via Whatsapp. The first questioner will already have been agreed and the questions planted. It's a PR farce," Brexiteer MP Nadine Dorries told reporters after the event.