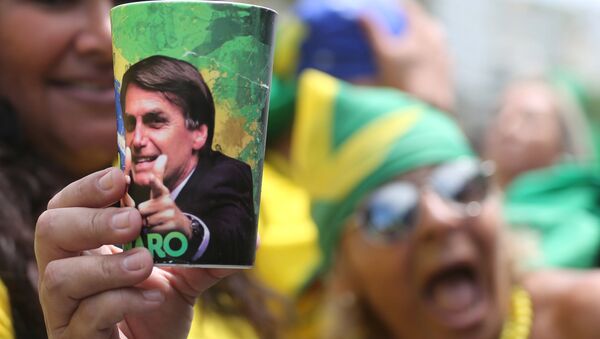 Facebook shut down 68 pages and 43 accounts that were reportedly being used to promote support for Brazil’s right-wing presidential candidate Jair Bolsonaro in the upcoming elections. Fulton Armstrong, a professor at American University, shared his comments on the matter with Sputnik.

Professor Fulton Armstrong, in a written comment for Sputnik, said that it's hard to determine who was behind the creation of the accounts that Facebook recently banned and that, according to local newspaper O Estado de S. Paulo, had supported Jair Bolsonaro. At the same time, he noted that Bolsonaro has the chance to become "Brazil's first — and the western hemisphere's second — social-media president," judging by his extensive WhatsApp campaign.

Armstrong added that Bolsonaro's campaign is based on "fears, concerns and limited understanding of the problems" that voters face and is harmful to "Brazil's development as a modern country." He noted that the conservative candidate's electoral campaign is also raising concern in the US, as the American right-wing is providing assistance.

Earlier, Facebook banned dozens of accounts and pages linked to Brazilian marketing group Raposo Fernandes Associados for violation of the social media network's spam policies. O Estado de S. Paulo reported that the blocked accounts had been campaigning for Brazil's right-wing presidential candidate Jair Bolsonaro. Facebook argued that it had not blocked the accounts for their content, but their behavior.